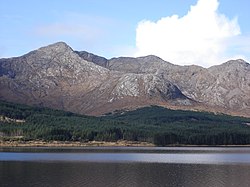 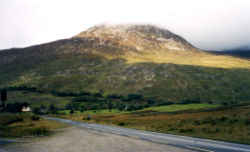 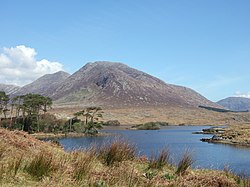 A view of Connemara from the N59

Connemara (Irish: Conamara) is a district in the west of Ireland of which the boundaries are not well defined. It is famed for its wild beauty, rough coast, its mountains and its remoteness. The mountains of Connemara are forbidding in their bulk, the most famous group being the Twelve Bens.

Connemara is a largely Gaelic-speaking area.

Connemara is not strictly defined. Often the name is used for all of County Galway west of Lough Corrib. Others use it of the “Gaeltacht” (Irish-speaking areas) of western County Galway, although these stretch beyond the lands traditionally taken to be Connemara.

Some would fix Connemara's eastern boundary around Barna just on the outskirts of the City of Galway, or at Maam Cross. Some have it as the land contained by Killary Harbour, the Maam Valley, Lough Corrib (as far as Moycullen) and a line from there to the sea at Barna, and the Atlantic Ocean. Yet others draw the eastern edge of Connemara more tightly in the south, with a line from Killary Harbour to Kilkieran Bay in the west of the county.

Whatever its actual extent, deep in Connemara there is no mistaking it for it can seem a place apart.

Connemara lies in the territory of Iar Connacht, "West Connaught", which is the portion of County Galway west of Lough Corrib. Connemara was traditionally divided into North Connemara and South Connemara. The mountains of the Twelve Bens and the Owenglin River, which flows into the sea at Clifden, marked the boundary between the two parts.

Connemara is bounded on the west, south and north by the Atlantic Ocean. Connemara's land boundary with the rest of County Galway is argued over but one common reckoning would have it at Lough Corrib and the Invermore River (which flows into the north of Kilkieran Bay), Loch Oorid, (which lies a few miles west of Maam Cross), and the western spine of the Maumturks mountains. In the north of the mountains, the boundary meets the sea at Killary, a few miles west of Leenaun.

The main town of Connemara is Clifden. The area around the town is rich with megalithic tombs. The famous "Connemara green marble" is found outcropping along a line between Streamstown and Lissoughter. It was a trade treasure used by the inhabitants of the prehistoric time. It continues to be of great value today. It is available in large dimensional slabs suitable for buildings as well as for smaller pieces of jewellery. It is used for the pendant for the Scouting Ireland Chief Scout's Award, the highest award in Irish Scouting.

The Ó Cadhla (Kealy) clan were the rulers of Connemara up until the 13th century, when they were displaced by the Ó Flaithbertaighs. The latter had fled into Iar Connacht from Maigh Seola during the English penetration of Connaught in the early 13th century.

Like the Ó Cadhla clan, the Mac Conghaile (Conneely) clan was also a branch of the Conmhaicne Mara.

The Vikings struck the coast in their day; the annals for 807 record that "A slaughter was made of the Conmaicni by the foreigners."

Towns and villages of Connemara include: