Not to be confused with Oughterard, County Kildare

Oughterard is a small town on the banks of the Owenriff River close to the western shore of Lough Corrib in County Galway. The population of the town in 2006 was 1,305. It is located some 16 miles north-west of Galway on the N59 road. Oughterard is the chief angling centre on Lough Corrib, and is also known as the 'Gateway to Connemara' as it is on the border of Connemara.

Two miles outside the town stand the ruins of Aughnanure Castle, a well-preserved example of an Irish tower house. Much of the surrounding area was occupied by the O'Flaherty clan, but was taken over by Walter de Burgh, 1st Earl of Ulster, in 1256. Ross Castle is also located a number of miles outside Oughterard. The mansion which is visible today was built by the Martin family in the 17th century but there is some evidence still present of the original castle structure, built in the 15th century by the O'Flaherty family, in its foundation.

The Quiet Man Bridge is located five miles past Oughterard, down the Leam Road, which was the setting for the 1950s film The Quiet Man starring John Wayne and Maureen O'Hara.

Also close to Oughterard, the Glengowla Mines (abandoned in 1865) is noted for its rare and beautiful octahedral crystals of fluorite and quartz. 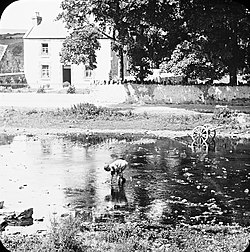 Oughterard railway station opened on 1 January 1895 and finally closed on 29 April 1935. There are daily buses going from and to Galway and Clifden. In wintertime on Sunday there is just one bus going from Oughterard to Galway.