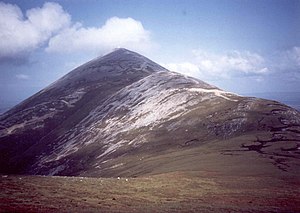 The Croagh Patrick Heritage Trail is a long-distance walking route in County Mayo, 38 miles long. It begins in Balla and ends in Murrisk.

The route is typically completed in three days.[1] It is designated as a 'National Waymarked Trail' by the National Trails Office of the Irish Sports Council and is managed by the Tóchar Valley Rural Community Network.[2]

The route was opened in 2009. (The trail won the runners-up prize in the Heritage category of the 2009 Co-operation Ireland Pride of Place awards.)

The trail travels in a westerly direction from Balla on a mixture of quiet roads, boreens, fields and forest and mountain tracks past the villages of Clogher, Ballintubber, Killavally and Aghagower before crossing the northern flanks of Croagh Patrick to reach Murrisk.[1]