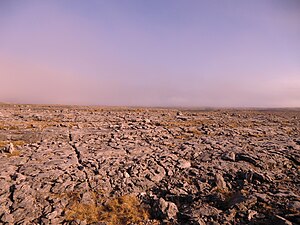 The Burren Way is a long-distance walking route in County Clare, 71 miles long and crossing the Burren, one of the most unearthly landscapes in the British Isles and one of the largest karst limestone landscapes in Europe.

The route begins in Lahinch and ends in Corofin. It is typically completed in five days.[1] The route comprises sections of tarmac road, boreen, droving road, path and forestry track.[1]

The Burren Way is designated as a 'National Waymarked Trail' by the National Trails Office of the Irish Sports Council and is managed by the Burren Way Committee.

The trail begins at the beach at Lahinch and follows minor roads to reach the Cliffs of Moher before continuing on roads to the village of Doolin. The route continues on roads to Lisdoonvarna.

North of Lisdoonvarna, the Way joins a boreen between the townlands of Ballinalacken and Formoyle, crossing the plateau above the Caher Valley below Slieve Elva mountain.[2] This section passes a number of places of historical interest, including Ballinalacken Castle, several ruined stone forts and Newtown Castle.

The trail rejoins the road to reach Ballyvaughan. From Ballyvaughan, the route mostly follows roads to Corofin by way of Carran and Killinaboy.[3]

The Burren Way originally followed a trail above the Cliffs of Moher from Hag's Head.[4] Many walkers now start from Ballyvaughan to walk the boreen the Way follows in its northern sections and eschew the southern sections altogether.[5]

A review of the National Waymarked Trails in 2010 found low usage of the Burren Way by multiday walkers but high usage by day walkers on certain sections.