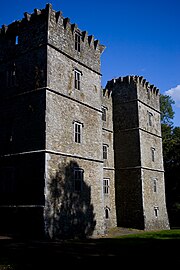 An Taisce (Irish for The Treasury), also known as the National Trust for Ireland, was established in 1948 with a similar mission to that of the National Trust in England, Wales and Northern Ireland. It is not a state organisation although it receives a modest annual government grant — less than €6,000 out of a total annual income in the region of €440,000, derived from member fees, bequests and donations. In August 2010 there were calls for an investigation into the organisation's finances when it was revealed that it received €30,000 corporate donations from incinerator company, Indaver, and supermarket giant Tesco Ireland, while at the same time, An Taisce were opposing some of the two Company's developments.[1]

The Planning Acts provide for An Taisce and about 20 other prescribed bodies to be informed of all planning applications in areas of scenic beauty or high amenity significance; where architectural, archaeological or environmental issues need to be considered. Local Authorities are obliged to consult An Taisce on a vast array of development proposals. Therefore, its range of expertise extends across Ireland's natural, built, and social heritage. It seeks to educate, inform, and lead public opinion on the environment; to advocate and influence policy; and manage heritage properties. It has recently taken a strong stand against the government and Royal Dutch Shell's plans to build an inland natural gas refinery in Erris.

The organisation is split into four operational divisions:

The organisation comprises over 5,000 members; annual individual membership is €45. They are organised into 15 local organisations and these report to a 50-person Ruling Council. The Council elects a board of management and other policy committees, including: