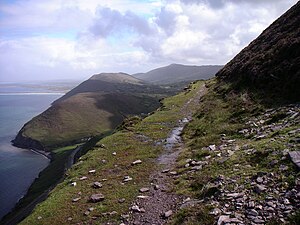 On the Kerry Way at Dingle Bay

The Kerry Way is a long-distance trail running through County Kerry. It is a circular trail of 133 miles that begins and ends in Killarney. The walk is typically completed in nine days.[1]

The is designated as a 'National Waymarked Trail' by the National Trails Office of the Irish Sports Council and is managed by Kerry County Council, South Kerry Development Partnership and the Kerry Way Committee. The Way circles the Iveragh Peninsula and forms a walkers' version of the Ring of Kerry road tour. It is the longest of Ireland's National Waymarked Trails.

The Kerry Way was first proposed in 1982 and developed by members of the Laune Mountaineering Club and the Kerry association of An Taisce, under the chairmanship of Seán Ó Súilleabháin.[2] Ó Súilleabháin was inspired by a history lecture he had attended given by Father John Hayes on the subject of old roads and paths in the southwest of Ireland.[3] Realising that "there was a spider's web-like network of roads and paths that could be combined to form a route around Kerry", he began devising the trail that would become the Kerry Way.[3] The first section—from Killarney to Glenbeigh—was opened in 1985.[4] It was the second long-distance trail to be opened in the Republic of Ireland, after the Wicklow Way.[5] The full route was completed and opened in 1989.[2] The trail was constructed by workers on Foras Áiseanna Saothair social employment schemes at a cost of £IRL60,000 and involved the provision of over 200 stiles and six footbridges as well as waymarkers.[2]

The name given for the purposes of the Irish language is Slí Uíbh Ráthaigh, meaning the 'Iveragh Way', after the Iveragh Peninsula.

The trail originally started at the River Flesk, a mile from Killarney,[7] but has since been extended to start in the centre of Killarney.[8] The initial stage passes through the grounds of Muckross House, the gateway to Killarney National Park, passing the shores Lough Leane and Muckross Lake to reach Torc Waterfall.[7]

From Torc, the trail follows the Old Kenmare Road and crosses Esknamucky Glen to reach the Black Valley.[9] The Way passes through the Black Valley below MacGillycuddy's Reeks, including Carrauntoohil, Ireland's highest mountain.[10]

From Glencar, the trail follows the Caragh River valley before circling Seefin Mountain to reach Glenbeigh.[13] There are two marked routes around Seefin: a shorter route to the west of the mountain via Windy Gap or a longer route to the east above Lough Caragh and overlooking Dingle Bay.[14]

The Way then climbs and follows the hills overlooking Dingle Bay until it reaches Drung Hill, where it turns inland to Foilmore.[15] A seven mile linking spur provides a connection from Foilmore to Cahersiveen.[16] From Foilemore, the route traverses two ridges to reach the village of Waterville.[17]

From Waterville, there are two possible routes to Caherdaniel: a coastal trail around Farraniargh Mountain or an inland trail, crossing Capall River and crossing mountains via Windy Gap to Caherdaniel.[18] An old coach road brings the Way to Sneem.[19] Sneem and Kenmare are connected by a trail that follows the coast above Kenmare River.[20]

The final stretch crosses the mountains between Kenmare and Killarney by way of another Windy Gap rejoining the outbound route of the Way at Galway's Bridge retracing the route through Muckross to the end in Killarney.[21]

The Kenmare to Killarney section of the Kerry Way forms part of 'European walking route E8', a conceptual route from Dursey Island in County Cork to the Bosphorus in Turkey.[22] The E8 would continue along the Beara Way from Kenmare and joins the Blackwater Way by way of an unmarked link section between Killarney and Shrone.