St Mullins is a village on the eastern bank of the River Barrow in the south of County Carlow. It is just a mile off the R729 road.

The name of the village in the Irish language is Tigh Moling, which was formerly anglicised as Timoling or Tymoling.[1][2]

Ruins of the monastery at St. Mullins

The village is named after St Moling (or Mo Ling, 614–697), who founded a monastery there in the early 7th century. The monastery was said to have been built with the help of "Gobán Saor", the legendary Irish builder. In the 8th-century manuscript, known as "The Book of Mulling", there is a plan of the monastery - the earliest known plan of an Irish monastery - which shows four crosses inside and eight crosses outside the circular monastic wall. It is said that St Moling dug a mile-long watercourse with his own hands to power his mill, a task that took seven years. He became Bishop of Ferns, died in 697 and is buried at St. Mullins.

The St Moling watercourse is still there, but the original monastery was plundered by the Vikings in 951 and was again burnt in 1138.

An abbey was later built on the site. A 9th-century high cross, showing the Crucifixion and a Celtic spiral pattern, stands outside the remains of the abbey. There are also the remains of a Norman motte and some domestic mediæval buildings, including one that has an unusual diamond-shaped window. St Moling's Mill and Well are not far away.

In Irish folklore, St Mullins is said to be the place where Suibhne Geilt dies, after having been welcomed into the monastery by Saint Moling himself. 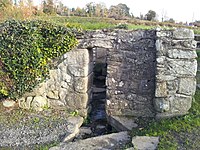 The first reference to a holy well at St. Mullins is to be found in the Annals of Friar Clyn (1348). In those times, the plague swept across Ireland and pilgrims visited the holy well in St. Mullins out of fear of the plague. They would circle the well in a clockwise direction, known as circumambulation, while reciting prayers.

For hundreds of years the holy well at St. Mullins was a revered place of pilgrimage. Canon John O'Hanlon, author of Lives of the Irish Saints, whose account dates from the late 1800s tells of the crowd assembling there on 17 June and on 25 July each year. They drank from the well and carried water home for those unable to visit. The pilgrims made the rounds (a prescribed walk) three times and waded barefoot through the stream. They recited prayers at each of the ruined churches where they prayed nine 'Our Fathers' and nine 'Hail Marys'.

Patron Day was traditionally kept on 17 June as a day of rest in the parish and nobody would work. According to one account on one occasion a local family went to work in the fields as usual. Suddenly St. Moling appeared to them. One of those present attempted to run away and he was turned into a stone at the place he had reached which is called 'Stuckan-na-Drana'. The workers who remained eating their lunch were also turned into stones. This happened at a place called 'Maol Oula' the Bald or Barren Place.

Fairs were held at St. Mullins on 17 June, St. Moling's Day, 25 July, St. James' Day, 8 September Feast of the Blessed Virgin Mary and on 1 November, Feast of All Saints.

As well as being popular with anglers, St Mullins is one of the stop-off points for pleasure barges and cruisers who ply the River Barrow. The building of the canal on the Barrow began here in 1750 and the Old Grain Store was built to store goods coming up the river from the sailing ships in New Ross. The horses and carts came down the tracks from the Blackstairs Mountains to gather their supplies and sell their goods for export. Horses were kept in the old stables to pull the barges up-river and the blacksmith was on hand to repair the barges and shoe the draught horses. By 1920 the Bolinder engine had arrived and with motorized barges the long serving horses were no longer needed. 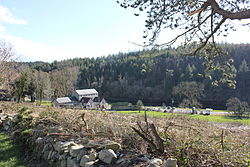 The River Barrow at St Mullins

St. Mullins is also the beginning and ending point for the Barrow Way long distance walk.