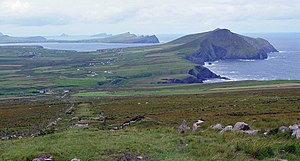 On the Dingle Way near Smerwick Harbour and Ballydavid Head

The Dingle Way is a long-distance trail around the Dingle Peninsula in the far west of County Kerry. It is a strenuous circular route 100 miles long, which begins and ends in Tralee and it is typically completed in eight days.

The route is designated as a National Waymarked Trail by the National Trails Office of the Irish Sports Council and is managed by the Dingle Way Committee and the local council.[1]

The trail begins in Tralee, following the towpath of an old ship canal to Blennerville, after which it follows the road for a while before climbing up to a mountain track along the northern flanks of the Slieve Mish Mountains. From here it descends towards Tralee Bay and the village of Camp.

The next few stages – Camp to Annascaul, by way of Inch Strand; Annascaul to Dingle, by way of Lispole; and Dingle to Dunquin, by way of Ventry – mainly follow minor roads and boreens. The latter section of the stage between Dingle and Dunquin follows a cliff path around Slea Head. The section between Dunquin and Ballycurrane follows a mixture of roads, beaches and cliff paths.

The most mountainous stretch of the Way now follows as the trail ascends a saddle between Brandon and Masatiompan mountains.[2] At 2,100 feet, this is the highest point reached by any of the National Waymarked Trails in Ireland.[3]

The Way then descends to Brandon village and follows a trail to the village of Cloghane. From Cloghane, the trail follows Fermoyle Strand, Ireland's longest beach, to Fahamore, before following roads to the village of Castlegregory.

The final stage follows the coastline to Camp before retracing the outward route to Tralee.