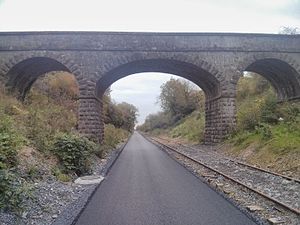 Bridge on the Dublin-Galway Greenway

The Dublin-Galway Greenway is a partially completed coast-to-coast 'greenway' and partial rail trail, in the Republic of Ireland, intended to run from the City of Dublin in the east to the City of Galway in the west. It will be the fourth greenway in Ireland, after the Great Southern Trail, the Great Western Greenway and the Waterford Greenway.

The trail is funded by taxpayers' money and envisioned as the western section of 'EuroVelo EV2: The Capitals Route', a conceptual cycle route from Galway, crossing Europe and ending in Moscow in Russia.

The Westmeath way stretches 17½ miles from the Meath-Westmeath border and will meet to the town of Ballinea, south-west of Mullingar.

The section from Mullingar to Athlone is a rail-trail over the disused Mullingar-Athlone rail line, (with refurbished former stations in Moate and Castletown Geoghegan). The Moate-Garrycastle section was officially opened in October 2015.[2][3][4]

Plans, by a community development organsisation in Kilbeggan, Westmeath, are underway to connect the Greenway to the Offaly Cycleways at Kilbeggan with a greenway to Tullamore, County Offaly.[8] Work is planned to begin by summer 2016.[8]

Planning is well underway for the Athlone to Galway route. There has been opposition from multiple stakeholders: the Galway Cycling Campaign is objecting to the proposal to place the route near to the N6 national primary road and significant numbers of local landowners have also expressed concern about the preferred route.[9] In October 2015 the Minister for Transport, Tourism and Sport withdrew funding for the section until local landowners were satisfied. Consultations continue.