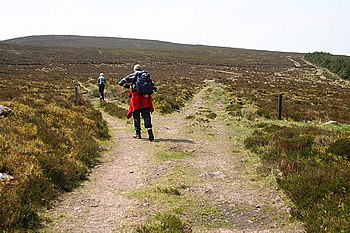 On the Avondhu Way section

Bridge over the Kerry Blackwater

The Blackwater Way is a long-distance walking that follows the valley of the River Blackwater in the Counties of Tipperary, Cork and Kerry. It is 104 miles long overall, beginning in Clogheen in County Tipperary and ending in Shrone in County Kerry. The route is typically completed in ten days.[1][2]

The route is designated as a 'National Waymarked Trail' by the National Trails Office of the Irish Sports Council and is managed by Avondhu Tourism and IRD Duhallow.