Clifden is a coastal town in County Galway, in the region of Connemara, located on the Owenglin River where it flows into Clifden Bay. As the largest town in the region, it is often referred to as "the Capital of Connemara". Frequented by tourists, Clifden is linked to Galway city by the N59 road.

The town was founded at the start of the 19th century by John D'Arcy (1785–1839)[1] who lived in Clifden Castle (built around 1818, now a ruin) west of Clifden. He had inherited the estate in 1804, when it was mostly inhabited by fishermen and farmers. The idea of establishing a town on the coast was first voiced by him in 1812. Bad communications and a lack of private capital prevented fast progress until the 1820s, when the potato crop failed in 1821-22 and D'Arcy petitioned the government in Dublin for assistance. The engineer Alexander Nimmo was sent to the area in 1822. He constructed a quay at Clifden (finished in 1831), and started a road to Galway.[2]:14,46 With these improvements to its infrastructure, the town began to grow.[3]:11

It prospered until, in 1839, John D'Arcy died. By that time, Clifden had grown from virtually nothing to a town of 185 dwellings, most of them three-floored, two churches, two hotels, three schools, a police barracks, courthouse, a gaol, a distillery and 23 pubs.[2]:14 The population had grown to 1,100 and the town already sported the (as yet unpaved) triangle of streets still visible today.[2]:14 Products that were shipped out from Clifden Harbour included marble, corn, fish and kelp. However, John's son and heir, Hyacinth, lacked his father's abilities and confrontations with his tenants became commonplace.[3]:14–15 In 1843, Daniel O'Connell held a 'Monster Meeting' at Clifden, attended by a crowd reportedly numbering 100,000, at which he spoke on repeal of the Act of Union.[2]:14

The town's surging growth and prosperity came to an end when the famine started in 1845. Large numbers of people died, as government help proved insufficient to deal with starvation, scurvy and other diseases. By 1848 90% of the population were on relief (receiving government money). Landlords went bankrupt as rents dried up. Many people emigrated to America. On 18 November 1850, Hyacinth D'Arcy put up his estates for sale and most of them were purchased by Charles and Thomas Eyre of Somerset. Hyacinth pursued a church career and became Rector of Omey and Clifden. Charles Eyre sold his share to his brother, who gave the estates to his nephew (Charles' son) John Joseph in 1864.[3]:14–15

In 1855, Sisters of Mercy from Galway came to Clifden and established St Joseph's Convent, followed by an orphanage and St Joseph's Industrial School in 1858.[2]:45

Clifden gained prominence after 1905 when Guglielmo Marconi decided to build his first high power transatlantic long-wave wireless telegraphy station four miles south of the town to minimize the distance to its sister station in Glace Bay, Nova Scotia. The first point-to-point fixed wireless service connecting Europe with North America opened for public service with the transmission of 10,000 words on 17 October 1907. At peak times, up to 200 people were employed by the Clifden wireless station, among them Jack Phillips, who later perished as Chief Radio Operator on the Titanic.

On 15 June 1919 the first non-stop transatlantic flight by Alcock and Brown crashlanded in Derrygimlagh bog, close to Marconi's transatlantic wireless station. When Captain Alcock spotted the green bog he thought it was a meadow where he could safely land his Vickers Vimy biplane. The plane's landing gear sank into the soft bog and was destroyed. Alcock and Brown had to walk into town with minor injuries. When they returned the locals had helped themselves to parts of the plane as souvenirs.[5]

When the Civil War started in June 1922, Connemara was controlled by the Republicans. In Clifden, the population tolerated the Republicans but did not support them. The Republicans occupied several buildings. In addition, all petrol was confiscated, roads barricaded and made impassable, railway bridges were blown up and telegraph lines cut. Newspapers were forbidden.[3]:222

The Republicans burned the buildings they evacuated. In Clifden, the workhouse was burned in July.[3]:222 In addition, on 25 July, the Republicans set fire to the Marconi Station and fired shots at it because they considered the station "a British concern",[3]:177 and because the RIC had used the station to marshall reinforcements in March 1921. Transatlantic wireless service[6] was transferred from Clifden to the more modern Marconi wireless station near Waunfawr, Caernarfonshire. By one reckoning, the station's closure caused an estimated 1,000 people to lose their livelihood.[3]:177

On 29 October, the Republicans recaptured Clifden from the around 100 National troops stationed there. The attacking force consisted of around 350 men. They also had with them an "armoured car", called The Queen of the West.[2]:44 This was used to advance towards a defended barracks building. Eventually, the National troops surrendered. However, the Republicans did not occupy the town, which had sustained some damage during the fighting. Communications were once again severed, and the Irregulars took up positions around the town.[3]:230–233

Finally, on 16 December, the National Army returned to Clifden and the Republicans once again slipped away before its arrival. The townspeople again welcomed the Army and soon repairs started on bridges and the railway line. Soon the first train in seven months arrived in Clifden.[3]:234–236

On 29 April 1935, the Midland Great Western Railway was closed, due to the advent of the motor car, and Clifden railway station fell into disuse.[4] 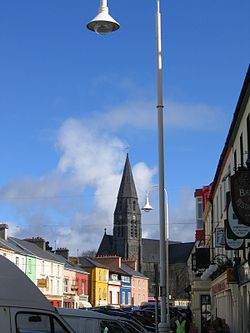 The N59 road from Galway (48 miles away) to Westport, County Mayo (40 miles) passes through the town.

In 1989, a group of Clifden businessmen issued shares for a company and applied for planning permission for a 4,000-ft runway and associated buildings at Ardagh. A group of locals began to campaign against this proposal, later calling themselves "Save Roundstone Bog". Galway County Council refused planning permission for the airport due to feared damage to the natural beauty of the area, and because it was designated an 'Area of International Scientific Importance' (ASI). The 'Clifden Airport Co.' appealed and as a consequence of the legal proceedings, which went all the way to the Supreme Court, ASI designations were found to be unconstitutional.[2]:57 The company later proposed to exchange the site at Ardagh for part of the Marconi site at Derrygimlagh. However, this also failed due to local and nationwide opposition. Eventually, a smaller 2,000-ft runway was suggested at Cloon near Cleggan.[2]:59 This runway was built in 2008 and the airfield was supposed to be used for flights to Inishbofin. It has been assigned the airport code EICD but by 2012 it had not been opened for traffic.[7]

Clifden is the main town in Connemara; therefore it is home to a range of services. The HQ for the Connemara Garda service is in Clifden and the main fire station for Connemara is in Clifden.

Part of the services on offer is a public library. It offers material relating to the history of the area. The library hosts an ongoing programme of exhibitions, readings and other cultural events. 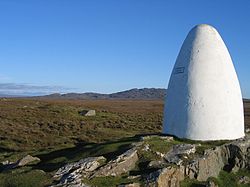 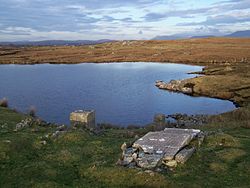 Clifden is a popular tourist destination for people exploring Connemara. Places of interest in and around Clifden include:

Clifden is home to Naomh Feichin's GAA club. Clifden is also home to the Connemara Blacks, which is the rugby team that is prominent in Connemara.

James Mylet's debut novel Lex is set in Clifden. The Guardian newspaper reviewed the novel as being set in "the fictional town of Clifden on Ireland's west coast", leading to at least one letter pointing out the inaccuracy of this statement.[9]