From Wikishire
(Redirected from Miners Way and Historical Trail)
Jump to: navigation, search 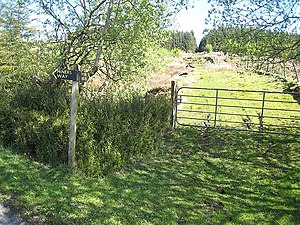 The Miners Way above the Arigna Valley

The Miners' Way and Historical Trail is a long-distance trail in the Republic of Ireland, which runs through three counties: Roscommon, Leitrim and Sligo. It is a circular route 73 miles long that begins and ends in Arigna, County Roscommon. It is typically completed in five days.[1]

Thee route is designated as a 'National Waymarked Trail' by the National Trails Office and is managed by Roscommon Integrated Development Company, and three councils. The trail was developed to encourage tourism in the area in the wake of the closure of the Arigna mines in 1990.[2] The route was originally conceived by a local priest, Father Sean Tynan, and built with funding from the European Regional Development Fund.[3] The trail was opened in July 2000.[3]

The trail consists of three looped routes that travel through neighbouring parts of Counties Roscommon, Leitrim and Sligo:

Parts of the Miners' Way and Historical Trail also form part of the Beara-Breifne Way, a walking and cycling route under development, intended to run from the Beara Peninsula, County Cork to Breifne (County Leitrim) following the line of Donal Cam O'Sullivan Beare's march in the adtermath of the Battle of Kinsale in 1602.