Killaloe is a large village and civil parish in eastern County Clare, adjacent to the border with County Tipperary. The village lies on the River Shannon on the western bank of Lough Derg and is connected by Killaloe Bridge to the "twin town" of Ballina on the eastern bank of the lake. The surrounding area is popular for hill-walking. 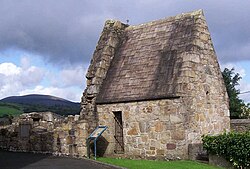 St Lua's church next to the Catholic Church of St Flannan's, Killaloe

The town owes its origin to a sixth-century monastic settlement founded by Saint Molua, or Lua, on an island in the Shannon 1 km below the present Killaloe Bridge which later moved onto the mainland.[1] In the tenth century it was base for Brian Boru as it controlled the strategic crossing of the Shannon above Limerick, where the Vikings were in control. Brian Boru had his palace, Kincora (Ceann Coradh), on the high ground where the current Catholic church stands. Therefore, between 1002 and 1014, when he was the High King, Killaloe was effectively the capital of all Ireland. A mile north of the town, his fort, Beal Boruma, stood on the site of an Iron Age ring at the head of Lough Derg, where a ford crossed the river. The word "Boruma" comes from the tribute paid by those crossing the river and is thought to be the origin of Brian Boru's name.

St Flannan's Cathedral (Church of Ireland) was built between 1185 and 1225, with an oratory for the same saint, who had been the abbot of Killaloe in the seventh century. The cathedral was destroyed and rebuilt in the fourteenth century. Of the original building, only a romanesque arch survives. In Elizabethan times, Ennis was chosen as the county town of Clare, and the importance of Killaloe declined.

In 1650, Cromwell spent 10 days on the opposite side of the Shannon at Ballina, exploring ways to cross the river, which was the defensive line of catholic and royalist forces before the Siege of Limerick.[1] 40 years later, Patrick Sarsfield was the leader of the Jacobite forces here, harrying the Williamite forces advancing on Limerick.

The earliest mention of a (wooden) bridge across the river is in 1013. This was often repaired and eventually replaced by a 17 arch stone bridge in the early eighteenth century, later reduced to 13 arches.[2] Most of the houses in the lower part of the town were built in the eighteenth century. In the nineteenth century the Shannon Steam Navigation Company had its headquarters here and constructed a canal to bypass the rapids below the town. 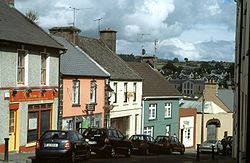 St Lua's oratory, built between 1000 and 1150, was moved from Friar's island to the site of the Catholic Church when the hydroelectric scheme at Ardnacrusha was constructed in the 1920s.[3] Killaloe parish is part of the Roman Catholic Diocese of Killaloe. Parish churches are Sacred Heart & St Lua's in Garraunboy, St Flannan's in Killaloe and St Thomas' in Bridgetown.[4]

Killaloe is home to the public school St Anne's Community College. Patricia Noonan was the first pupil through the school doors in September 1940.

The University of Limerick has its outdoor pursuits centre near Killaloe on the shore of the lake. 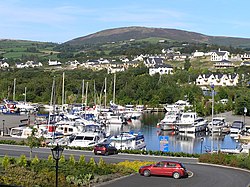 A trap and transport scheme is in force on the Shannon as part of an eel management programme following the discovery of reducing populations within the River Shannon. This scheme ensures safe passage for young eels between Killaloe Bridge and the Shannon Estuary.[7][8]

Killaloe is the home town of Phineas Finn, the fictional hero of two of Anthony Trollope's Palliser novels, Phineas Finn and Phineas Redux. In Phineas Finn, Killaloe is presented as a lively, if provincial, social centre. Phineas´s father, Dr Malachai Finn, is well known and respected 'in counties Clare, Limerick, Tipperary, and Galway'. Dr Finn is a friend of the Roman Catholic Bishop, another prominent Killaloe resident, and personal physician to the Earl of Tulla, who lives on his estate ′not more than ten miles from Killaloe′. Phineas returns to Killaloe for extended periods to spend time with his parents and with his five sisters and their friend, Miss Mary Flood Jones, who later becomes his first wife.

The 1917 comic song Paddy McGinty's Goat mentions the village as the scene of the events it describes.