Clonegal, otherwise written Clonegall is a village in the southeast of County Carlow, in a rural setting, three mils from Bunclody (across in County Wexford) and 14 miles from Carlow Town.

The village stands just over a mile north of where the River Slaney and the River Derry meet. Clonegal has a much smaller "twin" village across the River Derry in County Wexford, Watch House Village.

The town is served by a primary school, and is central to a thriving agricultural hinterland, although it has little business development. Further housing development is imminent.

The name 'Clonegal' comes from the Irish Cluain na nGall, meaning 'Meadow of the Foreigner'.[1] The reason for the name is unknown. Some contend that it came from foreign students who came to study in a monastery near the village. The romantic, or gruesome imagination has it that during the Irish Confederate Wars Cromwell's men fought the Irish in the village in 1650 after which all Irish surviving males were massacred.

It once had eleven malt houses in and around the village, along with a wool and corn store, a police station and other shops. 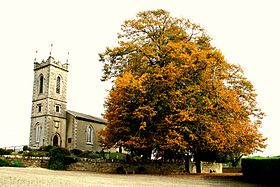