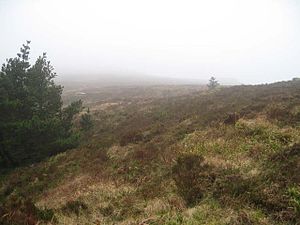 The Ballyhoura Way is a long-distance walking route 55 miles long in the south-west of the Republic of Ireland, passing through the Counties of Cork, Limerick and Tipperary.

The route begins at St John’s Bridge, near Kanturk in County Cork and ends at Limerick Junction in County Tipperary. It is typically completed in four days.[1] It is designated as a 'National Waymarked Trail' by the National Trails Office and is managed by Ballyhoura Fáilte.

The initial stage starts at St John’s Bridge, a crossroads four miles north of the town of Kanturk, and follows minor roads to Ballyhea by way of Liscarroll. From Ballyhea, the trail crosses the Ballyhoura Mountains to the village of Ballyorgan.

The Way continues through the mountains to Galbally via Kilfinane and Ballylanders.[3] From Galbally, it follows the Glen of Aherlow to Tipperary town before following the road to the end of the trail at Limerick Junction.

The Ballyhoura Way forms one of the stages of the Beara-Breifne Way, a walking and cycling route under development, intended to run from the Beara Peninsula, County Cork to Breifne, County Leitrim, following the line of Donal Cam O'Sullivan Beare's march in the aftermath of the Battle of Kinsale in 1602.[1] It connects with the Multeen Way in Tipperary town.[4]