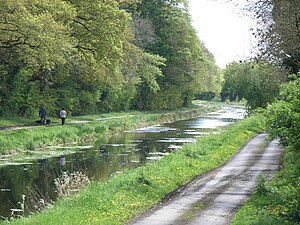 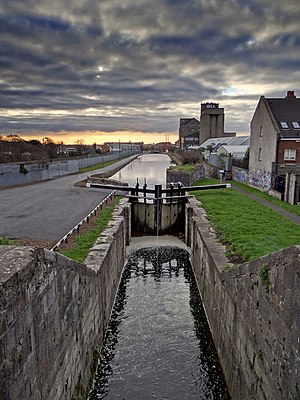 The Royal Canal as it enters Dublin city centre 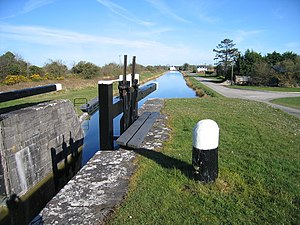 The Royal Canal is a canal originally built for freight and passenger transportation from the River Liffey in Dublin to Longford. The canal fell into disrepair in the late 20th century, but much of the canal has since been restored for navigation. The length of the canal to the River Shannon was reopened on 1 October 2010, but the final spur branch of the canal to Longford Town remains closed.

In 1755 when Thomas Williams and John Cooley made a survey to find a suitable route for a man-made waterway across north Leinster from Dublin to the Shannon. Originally they planned to use a series of rivers and lakes, including the Boyne, Blackwater, Deel, Yellow, Camlin and Inny and Lough Derravaragh. A disgruntled director of the Grand Canal Company sought support to build a canal from Dublin to Tarmonbarry, on the Shannon in north County Longford.

Work commenced in 1790 and lasted 27 years before finally reaching the Shannon in 1817, at a total cost of £1,421,954.[1] Building was unexpectedly expensive and the project was riven with problems; in 1794 the Royal Canal Company was declared bankrupt. The Duke of Leinster, a board member, insisted that the new waterway take in his local town of Maynooth. The builders had to deviate from the planned route and necessitated the construction of a 'deep sinking' between Blanchardstown and Clonsilla. The diversion also called for the building of the Ryewater Aqueduct, at Leixlip.[2]

The original 1796 fare from Dublin to Kilcock was 1/1, much cheaper than the stagecoach.

The canal passes through Maynooth, Kilcock, Enfield, Mullingar and Ballymahon has a spur to Longford. The total length of the main navigation is 90 miles, and the system has 46 locks. There is one main feeder (from Lough Owel), which enters the canal at Mullingar.

During the Famine, “the missing 1,490” starving tenants of Denis Mahon in Strokestown House, Roscommon, set out on foot from the estate in May 1847. Major Mahon had offered them the choice of emigration through “assisted passage”, starvation on their blighted potato patch farms or a place in the terrifying local workhouse. These families weakened by starvation walked for days along the tow paths of the Royal Canal to Dublin, where they were put on boats to Liverpool, and from there to Quebec aboard four “coffin ships” – cargo ships, ironically loaded with grain from Ireland, and unsuitable for passengers. It is estimated that half died before reaching Grosse Île in Canada. It was the largest single disposal of inconvenient tenants during the Famine. Major Mahon was shot dead that November, after news had got back to Roscommon about the fate of his former tenants. An annual walk on the canal banks commemorates the events.

By the 1830s the canal carried 80,000 tons of freight and 40,000 passengers a year. In 1845 the canal was bought by the Midland Great Western Railway Company. They considered draining the canal and building a new railway along its bed but decided instead to build the railway beside the canal. The two run side by side from Dublin to Mullingar. Competition from the railways gradually eroded the canal's business and by the 1880s annual tonnage was down to about 30,000 and the passenger traffic had all but disappeared.

It had a brief resurgence during World War II, when horses and barges returned to the canal. CIE took over the canal in 1944. As rail and road traffic increased, the canal fell into desuetude. In 1974 volunteers from the Inland Waterways Association of Ireland formed the Royal Canal Amenity Group to save the canal. By 1990 they had 46 miles of canal, from the 12th lock in Blanchardstown to Mullingar, reopen for navigation. In 2000 the canal was taken over by Waterways Ireland, a cross-border body charged with administering Ireland's inland navigations. On 1 October 2010 the whole length of the canal was formally reopened. 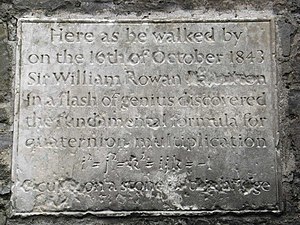 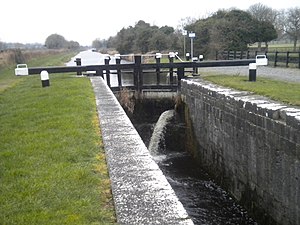 In 1843, while walking with his wife along the Royal Canal, Sir William Rowan Hamilton realised the formula for quaternions and carved his initial thoughts into a stone on the Brougham Bridge over the canal.

The Royal Canal was originally planned to terminate in Dublin at Broadstone, to serve the then fashionable area of residence, as well as King's Inns and the nearby markets, but it was extended so that now, at the Dublin end, the canal reaches the Liffey through a wide sequence of dock and locks at Spencer Dock, with a final sea lock to manage access to the river and sea.

The Dublin – Mullingar railway line was built alongside the canal for much of its length. The meandering route of the canal resulted in many speed-limiting curves on the railway. The canal was bought by the Midland Great Western Railway to provide a route to the West of Ireland, the original plan being to close the canal and build the railway along its bed.

The canal travels across one of the major junctions on the M50/N3 in a specially constructed aqueduct.

Today Waterways Ireland is responsible for the canal, and it was under their stewardship, in association with the Royal Canal Amenity Group, that the Royal Canal was officially reopened from Dublin to the Shannon on 2 October 2010.[3] Access points currently exist near Leixlip and at Maynooth, Enfield, Thomastown, Mullingar, Ballinea Bridge and Ballynacargy.

In 2006 a commemorative marker was erected at Piper's Boreen, Mullingar, to mark the 200 years since the canal reached Mullingar in 1806.

The Royal Canal Way is a 90-mile long-distance trail that follows the towpath of the canal from Ashtown, Dublin to Cloondara, County Longford.[4] It is typically completed in three days.[4] It is designated as a National Waymarked Trail by the National Trails Office of the Irish Sports Council and is managed by Waterways Ireland.[4] In 2015 Dublin City Council began extending the walking and cycling route along the Royal Canal Ashtown to Sheriff Street Upper. The Royal Canal Way connects with the Westmeath Way west of Mullingar, and will eventually form the eastern end of the Dublin-Galway Greenway, the final part of EuroVelo Route 2, a cycling path from Moscow across Europe to Galway.[5][6][7][8]

The Royal Canal was immortalised in verse by Brendan Behan in The Auld Triangle. A monument featuring Behan sitting on a bench was erected on the canal bank at Binn's Bridge in Drumcondra in 2004.

And the auld triangle went jingle jangle,
All along the banks of the Royal Canal.

The other major canal in Ireland is the Grand Canal from Dublin's southside through the Midlands to the River Shannon.

In the 19th century Broadstone was one of the most well known areas of Dublin, however very few people even know where it is today. From 1817 this area was home to one of the major transport hubs in 19th century Dublin, containing a major railway station and a canal harbour, linking to the Grand Canal, crossing the North Circular Road, and going past the Mountjoy prison. Along the way there were three dry docks. This area rose and fell in prominence among Dubliners as new forms of transport came and went.

The aqueduct and canal that once linked the site to the Royal canal are gone almost without a trace and what was a glorious Neo-Egyptian railway station is now a bus depot and garage. The canal was filled in at around 1927, converted into Blessington Park, and Phibsborough Library was built on top of it.