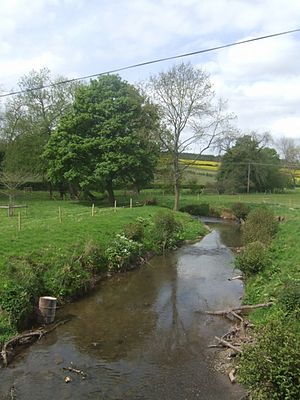 The Corve upstream of Beambridge

The River Corve is a minor river in Shropshire, which ultimately is a tributary of the River Teme, which it joins in the town of Ludlow. The valley it flows through is known as the Corvedale, a term used as a general name for the area.

During heavy flooding in 2007 when the river rose five feet in three hours, a house collapsed into the river and the Burway Bridge collapsed severing the connection of the B4361 Coronation Avenue, a major access route to Ludlow town centre.[1] A new, modern bridge designed by the Environment Agency constructed by the council, was completed in 2008. A temporary Bailey bridge had been erected to reduce disruption in traffic flow during the construction.[2]

In 2006 as a result of pollution by slurry from a nearby livestock farm in Brockton, fish were found dead in the river.[3]

Corvedale is the valley of the River Corve as it carves a green path between the soaring hills to either side; the dale is between Brown Clee Hill, Shropshire's highest hill to the south with its accompanying hills, and the long reach of Wenlock Edge to the north.

Between these two ranges, the dale reaches from around Bourton at the head of the dale, west-southwest past Munslow ond Diddlebury down until above Culmington, by which village the valley has opened out and river turns south toward Ludlow.

The churches of the dale are grouped as the "Corvedale Parishes" encompassing Diddlebury, Munslow, Holdgate, Tugford and Abdon, within the Diocese of Hereford.