Bewdley is a little town in Worcestershire which sits along the Severn Valley a few miles to the west of Kidderminster. It stands on the banks of the River Severn itself, which has provided prosperity to the town in times past, though on occasion the river has burst its due bounds and entered the town itself.

The main part of Bewdley town is situated on the western bank of the River Severn, including the main street — Load Street — whose name derives from lode, an old word for ferry. Load Street is notable for its width: this is because it once also served as the town's market place. Most of Bewdley's shops and amenities are situated along Load Street, at the top of which lies St Anne's Church, built between 1745 and 1748 by Thomas Woodward of Chipping Campden.

Beyond the church, High Street leads off to the south towards Stourport along the B4194, a road known locally as "the switchback" because of its many undulations. Unlike in many English towns, High Street is so called not because of its importance, but because of its geographical position 'high' above the river. A sandy slope locally known as Bewdley Beach, located on the northern Severn side, is used by local residents as a leisure area. There are several pubs, cafés, and restaurants along the riverside.

On the other side of the church, Welch Gate (so called because it once contained a tollgate on the road towards the west) climbs steeply up to the west, while a continuation of the B4194 leads north-west towards the Wyre Forest. To the north-east of the town is the wooded hilltop of Wassel Wood in Trimpley, the southern terminus of Shatterford Hill.

To the north-west, the town extends into Shropshire. 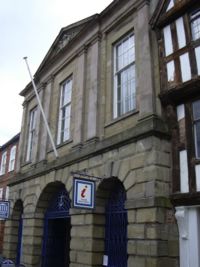 The settlement of Wribbenhall, on the eastern side of the Severn, and now part of Bewdley, was recorded in the Domesday Book of 1086 as being part of the manor of Kidderminster. By the 14th century, the town had come to be known as Beau lieu, French for "Beautiful place" - a compliment that fits well with John Leland's statement in his Itinerary two centuries later that "a man cannot wish to see a towne better".

Bewdley was granted borough status, as well as a weekly market, by King Edward IV in 1472. A parliamentary report of 1777 listed Bewdley as having a parish workhouse accommodating up to 80 inmates.

For many centuries Bewdley had its own Member of Parliament, of whom the famous was the Conservative Prime Minister Stanley Baldwin who represented the borough from 1907 to 1937.

The former quayside on the western bank of the river has been much prettified and landscaped over the last few decades, and its rows of Georgian townhouses and buildings are well seen from Telford's bridge. Since the completion of the flood defences in 2006 (see below), a "Civic Space" has been introduced to replace the old bandstand. It is used on a variety of occasions including the regular local Farmers' markets. 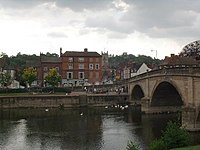 Bewdley bridge and Severn Side South, 2003

The River Severn often used to burst its banks in winter, flooding many houses and commercial premises in Bewdley. However, after the 2000 floods, plans were made for flood defences on the western bank, and this work was completed in April 2006, costing £7 million.[1] Temporary barriers are also put up to protect properties on the eastern side of the river in Wribbenhall.

Among the worst floods in living memory were those in 1947, 1968 and 2000, where 140 properties were affected.[1] Bewdley's long experience of dealing with flooding led to the setting up of the National Flood Forum in the town in 2002.

Bewdley Bridge over the Severn was built in 1798 by Thomas Telford. It was erected to replace the 1483 mediæval bridge which was swept away in the floods of 1795.

A modern road bridge carries the Bewdley bypass, opened to the south-east of the town at Blackstone in 1987 after many decades of campaigning, across the river.

The Tenbury and Bewdley Railway branched off Severn Valley Railway at Bewdley, and ran through the Wyre Forest to Tenbury Wells. It crossed the river at Dowles, a little to the north of Bewdley. The bridge itself no longer exists, although its imposing brick pillars remain.

The 'Discover Bewdley' weekend takes place on the May Bank Holiday weekend. The weekend features artists, events, market stalls, a parade and the launch of the Bewdley Heritage Trails. The Bewdley Festival, featuring a variety of artistic performances, is held in the town each October, and Bewdley also hosts one of the largest inland river regattas in the country. The successful Bewdley Beer Festival is held each August Bank Holiday weekend. Bewdley also has a carnival which takes place every June.

Bewdley also has a ghost walk. 'The Original Bewdley Ghost Walk' Hosted by Aurora Promotions. This takes place on the 3rd Friday of every month (Tickets available from the Tourist Information Centre).

Things in and around the town

The West Midland Safari Park lies just out of the town, on the A456 towards Kidderminster.

Bewdley is also the headquarters of the Severn Valley Railway, a heritage railway running the 16 miles between Kidderminster and Bridgnorth.

The Queen Elizabeth II Jubilee Gardens (usually abbreviated to simply "Jubilee Gardens") are tucked away between the rear of Bewdley Museum and the River Severn.

Bewdley is surrounded by the Wyre Forest, and there are many footpaths and cycle routes through the unspoilt woodlands. There is a visitor centre situated just outside Bewdley on the road to Cleobury Mortimer, where many waymarked trails through the forest start from.

The Bewdley museum (admission free), housed in the Guildhall (alongside the Tourist Information Centre) explores the history of the town and has displays on local crafts such as coopering, basket making, agriculture and tanning.

A regular general market on Saturdays took place until 2008, although specialised markets have continued. In June 2009, Wyre Forest District Council was approached by a former stall-holder with a view to reviving the market close to the bridge.[2]

Just outside Bewdley is Beau Castle, a Victorian mock-Gothic house, built in 1877. It was developed by the industrialist and former Mayor of Birmingham and Bewdley, George Baker. Beau Castle was designed by John Ruskin and Richard Doubleday with stained-glass windows by Edward Burne-Jones.