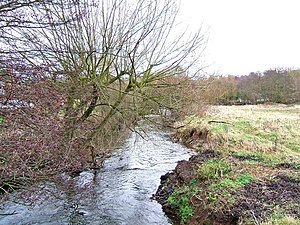 The Stour near Wilden

The River Stour flows through Worcestershire and Staffordshire before entering the River Severn, of which it is a major tributary. The Stour is about 25 miles in length. It has played a considerable part in the economic history of the Black Country through which it flows.

The name Stour is a commonplace rive name in Great Britain, for which no certain origin has been identified; it may be Old English or Old Welsh. 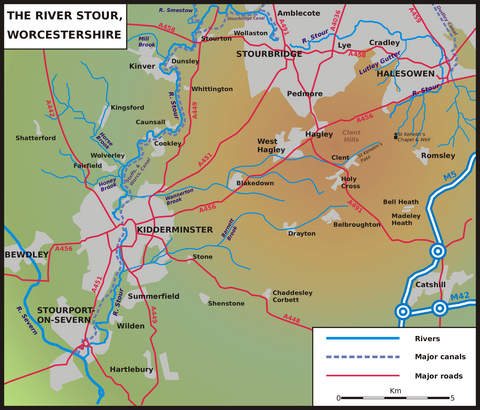 Sketch map of the course of the River Stour

The river rises in the north of Worcestershire in the Clent Hills, near St Kenelm's Church in Romsley. It collects water from many small tributary streams from the Clent Hills as it descends, following a generally north-easterly course, before veering north and entering the Black Country near Halesowen, around which point it begins to form the boundary between Worcestershire and Staffordshire, and it continues in this duty for several miles.

The river continues to gather strength from Clent streams as it flows through Halesowen, before turning westwards through the southern part of the Black Country, It flows through Cradley and Lye and then between Stourbridge, to which it gives its name, and Amblecote, historically an important centre of the glass industry.

At Amblecote the river passes half-concealed through industrial estates that have replaced traditional heavy industry, shadowed for a few miles by the Stourbridge Canal. The river leaves the conurbation around the suburb of Wollaston, descending fairly rapidly to Prestwood.

The Stour leaves the border to run through Staffordshire alone at Prestwood and veers southwards. From here on in the Stour is shadowed by the Staffordshire and Worcestershire Canal. The canal crosses over the river on a sandstone aqueduct just before the Smestow Brook enters the main river: the Smestow Brook, coming out of Staffordshire’s Black Country towns and draining the area north to Wolverhampton, is an important tributary.

Having swallowed the Smestow Brook, the Stour flows south to Stourton and then loops along the eastern edge of the large village of Kinver, whence its course runs back into Worcestershire.

Passing through the villages of Caunsall, Cookley and Wolverley, it is joined by the Horse Brook, which drains an area extending northward into Shropshire, and the Honey Brook. Further south, the Wannerton Brook brings in water from the Blakedown area, on the western fringe of the Clent Hills. The Stour then bisects Kidderminster from north to south. Here it is hidden from sight for a short distance as it passes beneath the canal, to emerge on its eastern side. At the southern edge of Kidderminster the Stour is joined by the Barnett Brook, a major tributary which begins in the Clent Hills, and which, together with the Hoo Brook, creates a large complex of pools to the east. Passing through the formerly navigable section around Wilden.

The Stour joins the River Severn at Stourport-on-Severn, in a small, old industrial area to the east of the canal port.

The Stour rises on the north-eastern edge of the Clent Hills, an outcrop of New red sandstone that traps it on the plateau on the county borders. Its course is mainly over similar sandstone, together with some gravels, as it finds its way off the plateau by a fairly circuitous route, to the Severn valley. In this it is similar to the Tame and its own tributary, the Smestow: all are forced to wander far along generally shallow gradients as they find their way from the plateau, which is essentially a shallow dish in shape - a low tableland with raised edges. It carries mainly sandy sediments, as can be seen after rainfall.

The Stour was once a trout stream, but became severely polluted with chemicals that were released into it by industries along its banks, particularly acid from the holloware industry of Lye. In the final decades of the 20th century, this pollution ceased, and the river was cleaned up. Nowadays, wildlife is making a comeback in the Stour with kingfishers and grey heron present, as well as recent reports of salmon and trout beginning to recolonise as far as Stourbridge.

Mills were a crucial part of the mediæval economy and the Stour was well able to power them. At Cradley, at the confluence of the upper Stour and the Lutley Gutter (also known as the Pudding Brook), in what was to become the Black Country, the earliest mentions of mills date back to the 12th century.[1] Two corn mills are mentioned in Kinver in Domesday Book.[2]

From the Middle Ages, the lower Stour was important in this early industrial development, as its fulling mills thickened cloth made in Worcester, Kidderminster, and Kinver. From the 17th century iron forges fined pig iron and slitting mills, which cut bars of iron into rods for the production of nails in the Black Country. Blade mills (on tributaries), sharpened the blades of scythes and other tools from the 15th century.[3] Richard Foley established one of the earliest slitting mills was at the Hyde, Kinver in 1627.[4]

Many of the mills on the Stour were formerly concerned in the iron industry. At Whittington, near Kinver, had a forge and then a slitting mill, and finally a nail mill.[5] Mills were converted from one use to another, as demand fluctuated, fulling mills of the 16th century, often became forges or slitting mills in the 17th. The industry in the 17th century is widely connected with the name of Dud Dudley (an illegitimate son of Edward Sutton, 5th Baron Dudley) who carried out early experiments, using coal products to substitute for charcoal in iron production. The Dudley family had works at Cradley. However, this is because he wrote a book, Metallum Martis. The Foley family were much more important in the 17th century and the Knight family in the 18th. Iron production continued well into the 19th century (occasionally, even later), but the valley was overshadowed by the coke (fuel)|coke-based industry on the Black Country plateau.

In the 1660s and 1670s, Andrew Yarranton attempted to make the river Stour itself navigable along much of its course. But these efforts were finally abandoned around 1680, when funds were exhausted. It is doubtful whether it would have been a profitable enterprise, had it succeeded. At Wilden a short section of the Stour, of about a mile, was successfully made navigable but because of all the bends it is recorded that it was not easy to navigate. There was a lock at Pratt's Wharf (misnamed Platt's Wharf by the Ordnance Survey) connecting the Staffordshire and Worcestershire Canal with the river. This enabled canal barges to use the River Stour to deliver timber to a steam saw-mill in Wilden. Later it was used to transport coal and iron to the Wilden Works. The wharf was built by Isaac Pratt from Henwick, Worcester in 1835. He is described as a businessman and a merchant. There were two houses at Pratt's Wharf, one occupied by a lock keeper and the other by a clerk. The link was closed c1950.[6]

The Staffordshire and Worcestershire Canal, planned by James Brindley, was built between 1770 and 1772. It shadows the Smestow, and then the Stour from Prestwood southward, cutting across its many bends and meanders. From Stourton Junction (near Prestwood), the Stourbridge Canal led to Stourbridge, thus shadowing the upper Stour, while branches led towards collieries near Brierley Hill and linked to the Dudley Canal. These were all built in the late 18th century, effectively creating a canal network parallel to the river network.

Kidderminster, long a centre of cloth manufacture, increasingly specialised in carpet-making from about 1785. The Stour took on a fresh importance as this industry grew, driving the fulling and weaving processes, as well as carrying away the effluent - particularly when dyed cloth was washed in the river. The flow of the Stour became so crucial to the manufacturers of the town that they persistently fought attempts to extract water for industrial and domestic use from the Smestow - potentially of great value to Wolverhampton and the Black Country.[7]

The magnificent Stambermill Viaduct carries the what was the former Oxford, Worcester and Wolverhampton Railway line over the Stour between Stourbridge and Lye. It now is only used by goods trains.

The main tributaries of the Stour are, travelling upstream from source to Severn:

The Lutley Gutter, also known locally as the Pudding Brook, which enters at Cradley and has powered industry The ‘’’Smestow Brook’’’, the Stour's largest tributary The ‘’’Mill Brook, which enters opposite Dunsley near Kinver The Horse Brook or Horsebrook, bringing water from the Shatterford and Kingsford areas.

The main towns and village on the Stour are, travelling upstream from its confluence with the River Severn: