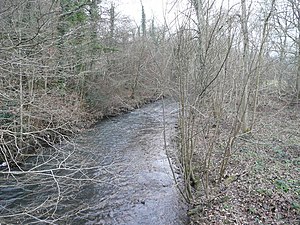 The River Onny is a river in Shropshire. It is a major tributary of the River Teme.

The river has its sources in the Shropshire Hills at White Grit, in south-western Shropshire. It has two branches, the East Onny and West Onny, which converge at Eaton, to the east of Lydham.

The united River Onny then flows in a south-easterly direction, through Craven Arms and Onibury (to which village it gives its name), before it finally enters the River Teme just upstream of Ludlow at Bromfield.

Geologically, the Onny has the type section just west of Craven Arms of the Caradocian series of the Ordovician system and there is a trilobite genus Onnia.