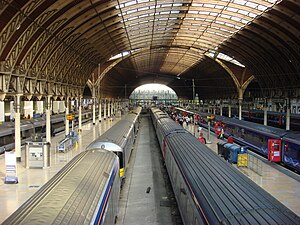 Maidenhead Railway Bridge carrying the line over the River Thames 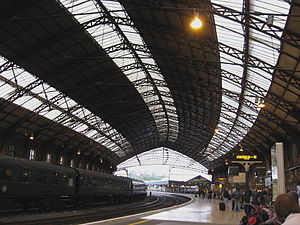 The line was built by the Great Western Railway and engineered by Isambard Kingdom Brunel as a dual track line using a wider seven-foot broad gauge and was opened in stages between 1838 and 1840. The alignment was so level and straight it was nicknamed ‘Brunel’s Billiard Table’. It was supplemented with a third rail for dual gauge operation allowing standard-gauge trains to also operate on the route in stages between 1854 and 1875. Dual gauge was introduced as follows: London to Reading (1 October 1861), Reading to Didcot (22 December 1856), Didcot to Swindon (February 1872), Swindon to Thingley Junction, Chippenham (June 1874), Thingley Junction to Bathampton (16 March 1875), Bathampton to Bristol (June 1874), Bristol station area (29 May 1854). The broad gauge remained in use until 1892. Evidence of the original broad gauge can still be seen at many places where bridges are a wider than usual, or where tracks are ten feet apart instead of the usual six.

The original route to Swansea, after the opening of Brunel's Chepstow Railway Bridge in 1852, left the Bristol-bound main line at Swindon, proceeding via Stroud, Gloucester and Chepstow before rejoining the line as we know it today at Severn Tunnel Junction. This gave rise to the nickname 'Great Way Round'.

In 1886, the opening of the Severn Tunnel brought the opportunity of a more direct route, and trains from Swindon to Newport and beyond were routed via Bristol and the Severn Tunnel. This route leaves the one we know today at Wootton Bassett near Swindon rejoining it close to Patchway station.

The route used today was established in 1903 with the building of what is often known as the Badminton Line.[2] This involved the construction of about 33 miles of new track including two tunnels at Alderton and Sodbury between Wootton Bassett and Patchway. Not only did this provide a more direct route, the gradient was easier for coal trains to negotiate, and it was perceived that the line would be a boost to what was, at the time of building, the expanding port of Fishguard. This was the GWR's connection with liner departures for the United States.

At the outbreak of World War I in 1914, the Great Western Railway was taken into government control, as were most major railways in Britain and were reorganised after the war into the "big four" companies, of which the Great Western Railway was one. The railways returned to direct government control during World War II before being nationalised to form British Railways in 1948.

More widening infrastructure work took place between 1931 and 1932, and the branch through Newport as far as Cardiff was quadrupled 1941.[3]

The line speed was upgraded in the 1970s to support the introduction of the InterCity 125 (HST).[4]

In 1977 the Parliamentary Select Committee on Nationalised Industries recommended considering electrification of more of Britain's rail network, and by 1979 BR presented a range of options that included electrifying the GW Main Line from Paddington to Swansea by 2000.[5] Under the 1979–90 Conservative governments that succeeded the 1976–79 Labour government the proposal was not implemented.

The route of the GWML includes dozens of listed buildings and structures, including tunnel portals, bridges and viaducts, stations, and associated hotels.[1] Part of the route passes through and contributes to the Georgian Architecture of the City of Bath World Heritage Site - the path through Sydney Gardens has been described as a "piece of deliberate railway theatre by Brunel without parallel".[6] Grade I-listed structures on the line include London Paddington, Wharncliffe Viaduct, the 1839 Tudor gothic River Avon Bridge in Bristol, and Bristol Temple Meads Station.[7]

From east to west:

From London to Didcot, the line follows the Thames Valley, crossing the River Thames three times, including on the famous Maidenhead Railway Bridge. After Swindon, trains pass the Swindon Steam Railway Museum. From Wootton Bassett the route splits towards Bristol and Swansea.

It is also possible to run via the Wessex Main Line, but this involves a reversal at Bradford Junction, so is only really suitable for multiple unit trains or via Reading to Bath via Newbury. Trains on the Great Western Main Line are sometimes diverted from Reading along the Reading to Taunton line, as far as Westbury, from where they can use the Wessex Main Line to reach either Chippenham, or Bath Spa. Beyond Bristol, some trains continue on the Bristol to Taunton Line to Weston-super-Mare or beyond.

Between London and Didcot there are four tracks, two for each direction. The main lines are mostly used by the faster trains and are on the south side of the route. The relief lines on the north side are used for slower services and those that need to call at all stations as only London Paddington, Slough, Maidenhead, Twyford, Reading and Didcot Parkway stations have platforms on the main lines (although a few others have main line platforms that can be used in an emergency). Between Didcot and Royal Wootton Bassett there are a series of passing loops lines to allow fast trains to overtake slower ones. This section is also signalled for bi-directional running on each line but this facility is usually only used during engineering working or when there is significant disruption to traffic in one direction.[8]

The line speed is 125 mph.[9] The relief lines from Paddington to Didcot are limited to 90 mph as far as Reading, and then 100 mph to Didcot. Lower restrictions apply at various locations.[8]