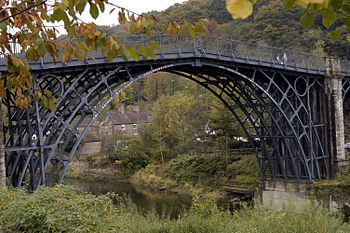 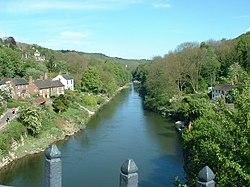 Downstream from the Iron Bridge

The Ironbridge Gorge is a deep gorge carved by the River Severn in the midst of Shropshire.

The gorge was originally called the Severn Gorge, but in 1779, at the dawn of the Industrial Revolution, a bridge of cast iron was built across it to link the industrial town of Broseley with the smaller mining town of Madeley and the growing industrial centre of Coalbrookdale., The Iron Bridge was the first iron bridge of its kind in the world, and today the gorge is named from that bridge. The industrial village built in the gorge here was also named Ironbridge.

The bridge stands now as a monument to the industry that began in the Severn Gorge.

Two reasons made the site so useful to the early industrialists:

Towns and villages beside and close by the Gorge include those with distinctly industrial names such as Ironbridge, Coalbrookdale and Coalport, and older names such as Buildwas and Broseley.

The Shropshire Way long distance footpath runs through the gorge.

The gorge carries the River Severn south towards the Bristol Channel. It was formed during the last Ice Age when the output from the previously north flowing river became trapped in a lake (known as 'Lake Lapworth') created when the Irish Sea ice sheet dammed the river. The level of the lake rose until it was able to flow over the hills to the south. This flow eroded a path through the hills forming the gorge and permanently diverting the Severn southwards.

Conservation in the Gorge

Green Wood Centre is a national leading body on the revival of the coppicing industry and has spent over twenty years training new coppice and woodland workers.

Severn Gorge Countryside Trust and The Green Wood Centre run a joint volunteer project enabling local people to work local land in activities such as coppicing, scrub removal, deer fencing, step building and woodland management. Areas where you'll be able to see the kind of work done are Benthall Edge, Lloyds Coppice and Captain's coppice. All within walking distance of the Ironbridge.

In 1986, UNESCO listed Ironbridge Gorge as a World Heritage Site, in order to recognise the area’s unique contribution to the birth of the Industrial Revolution in the 18th century, which transformed the world. Here several pioneering industrialists built new methods and industries, including Abraham Darby, William Reynolds and John Wilkinson, so that by the end of the 18th century this little Shropshire gorge was the most technologically advanced area in the world. The heritage area includes the built and natural environment, museums, monuments and artefacts, and the Iron Bridge itself.

The air is no longer filled with smoke and fire and the relentless sound of hammers. The great mills have ceased to turn and the furnaces have cooled. The Ironbridge Gorge today is thronged not with industrial workers but with visitors sampling the eighteenth / nineteenth century atmosphere of the place and the great bridge, all within the beauty of the gorge and its timeless river, and they are wel catered for.