Steep Holm is an island in the Bristol Channel. It is one of a pair with neighbouring Flat Holm, and though the two cannot be separated, and both are uninhabited, convention would assign Flat Holm to Glamorgan and Steep Holm to Somerset. The island covers 48.87 acres at high tide, expanding to 63.26 acres at mean low water.[1] At its highest point it is 256 feet above mean sea level.

The island serves as a wind and wave break, sheltering the upper reaches of the Bristol Channel. The island is formed of carboniferous limestone and is geologically a continuation of the Mendip Hills at Brean Down.[2] The island is now uninhabited, with the exception of the wardens, and protected as a nature reserve and Site of Special Scientific Interest (SSSI), SSSI notification|notification having taken place in 1952.[3]

According to legend in the 6th century Saint Gildas lived on Steep Holm visiting his friend Saint Cadoc, who lived on Flat Holm as a hermit.[4] Gildas supposedly left the island to become Abbot of Glastonbury.[5]

Both Steep Holm and Flat Holm were fortified in the 1860s as a defence against invasion. They form part of a line of defences, known as Palmerston Forts, built across the channel to protect the approaches to Bristol and Cardiff.

The island was fortified following a visit by Queen Victoria and Prince Albert to France, where they had been concerned at the strength of the French Navy. The Royal Commission on the Defence of the United Kingdom, under direction of Lord Palmerston, recommended fortification of the coast and the island formed part of this strategic coastal defence system. Construction began in 1865 and was completed in 1869.[6]

Steep Holm has several gun batteries, some of which are Scheduled Ancient Monuments, and a centralised group of brick-built barrack blocks. 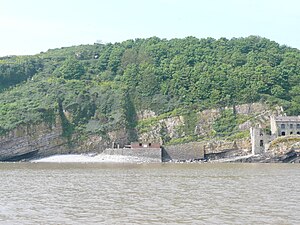 The island is owned by the Kenneth Allsop Memorial Trust, a charity which took over the administration of Steep Holm in 1974 in memory of the broadcaster and naturalist Kenneth Allsop, and purchased it in 1976.[1] The mission statement of the Trust is: "To protect, preserve and enhance for the benefit of the public the landscape, antiquities, flora, fauna, natural beauty and scientific interest of the island of Steep Holm in the County of North Somerset and to advance the education of the public in the natural sciences."

Visits can be made to the island. The trust runs day-long boat trips from Weston-super-Mare. One barrack block is in use to provide visitor facilities.