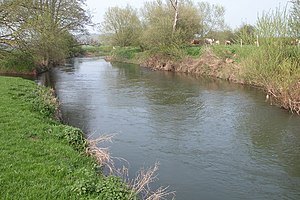 The River Lugg at Hampton Bishop

The River Lugg (Welsh: Afon Llugwy) runs 45 miles through Radnorshire and Herefordshire before entering the River Wye below Hereford.

The Lugg rises in the hills northwest of Llangunllo, in Radnorshire. From here it flows down through Presteigne and across into Herefordshire. In Herefordshire the Lugg runs through Leominster, south of which it is met by a tributary, the River Arrow, then to a confluence with the River Wye, which it joins at Mordiford, nine miles downstream of Hereford and 45 miles from its source.

Below Leominster the river was made navigable under the River Wye & Lugg Navigation Act 1696 for improving the River Wye, and had pound locks. Despite several attempts to improve it, including making flash locks against bridges, the river was probably never a satisfactory navigation. Commercial navigation probably ceased in the early 19th century. It is still sometimes used by small boats, but can be very dangerous when in flood. The Environment Agency is the navigation authority for the river. 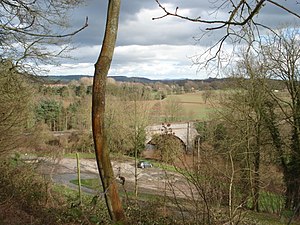 A railway bridge over the River Lugg near Dinmore

The river is popular with canoeists.[1]