Kinver is a large village in south-western Staffordshire, close to the Black Country. The nearest towns are Stourbridge and Kidderminster. The Staffordshire and Worcestershire Canal passes through, running close to the course of the meandering River Stour. According to the 2011 census Kinver ward had a population of 7,225.[1]

The village has three schools: Foley Infant School, Brindley Heath Junior School and Kinver High School, now part of the Invictus Multi Academy Trust. The Infant school rings the home time bell 20 minutes before the Junior or High Schools. This is to allow the parents collecting children from both sites to cover the three quarters of a mile journey.

Kinver Edge comprises 280 acres of land owned by the National Trust and open to the public. To the south of this (in Worcestershire) is Kingsford Country Park. The Staffordshire and Worcestershire Canal which runs through the parish is popular with boaters, particularly in the summer months.

Kinver Country Fayre is a yearly event that takes place on Fathers' Day and attracts thousands of visitors to the village. There is also a Christmas "Big Tree" event that celebrates the lighting of a large Christmas tree situated in front of the library.

A recent development is the now annual Kinver Music Festival.

St Peter's Church, the village and parish church sits in a prominent position on a hill just south of the village.

Several hamlets lie in the parish of Kinver, including Compton, Stourton and Whittington. The neighbouring village of Enville is in its own parish.

Kinver has, at various times in the past, been spelt on maps and documents as: Kinfare, Kynfare, Chenfare, Chenevare, Chenefare (as listed in the Domesday Book) and Cynefare. It is thought likely that it is a corruption of Cefn Fawr - [Common Brittonic] phrase meaning Big Ridge, featuring, as it does, a big sandstone ridge. The ancient Hill Fort atop the Edge is of possible Bronze-age and certainly Iron Age origin. A Roman presence at nearby Greensforge Fort dates from around 47 AD.

The hilltop church is on a very ancient site, and the current church, dedicated to St Peter dates from the 12th century. The village High Street was laid out as the burgages of a new town by the lord of the manor in the late 13th century and was administered by a borough court, separate for the manorial court for the rest of the manor of Kinver and Stourton (known as Kinfare Foreign).

The main pub, The White Hart, dates from the 14th century, and the Anchor Hotel (now developed as housing) from the 15th Century. The Grammar School, although it closed as a school in 1915, is 16th Century.

Kinver was known for making sturdy woollen cloth, using the flow of the Stour for fulling mills and dyeing. The village also profited from being a stop on the great "Irish Road" from Bristol to Chester (until the 19th century, the port of embarkation for Ireland), the 'White Hart' being the oldest and largest inn.

There was a brief cavalry melee on the Heath during the Civil War between "Tinker Fox" the local Parliamentary commander and local Royalist forces. Fox retired to Stourton Castle which was briefly invested by the Royalists. During his flight from the Battle of Worcester Charles II made his way over Whittington Heath into nearby Stourbridge.

Later, the river was used to power finery forges and from 1628 the first slitting mills, including Hyde Mill which was among the earliest in the country. There were five slitting mills in the parish by the late 18th century, more than any other parish in Great Britain. These slit bars of iron into rods to be made into nails in the nearby Black Country.[2] 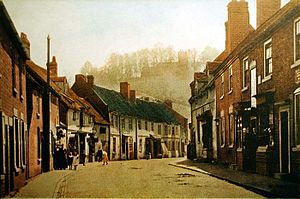 Stourton Castle figured notably in the history of the English Civil Wars. It was the birthplace of Cardinal Reginald Pole, Archbishop of Canterbury, who came within a whisker of the papacy.

In 1771 the area was opened up to trade by the Staffordshire and Worcester Canal, built by James Brindley.

In Victorian and Edwardian times it was a popular Sunday day out for people from Birmingham and the Black Country, via a 1901 pole & wires tram extension that ran across the fields, the "Kinver Light Railway".

The nailshops and forges ceased work around 1892, and local ironworks are thought to have all closed in about 1912 or 1913.

Kinver Light Railway, an innovative electric light tramway opened on 4 April 1901 and helped establish the local tourism industry. However, as buses became more popular during the 1920s, it was eventually closed on 8 February 1930.

The National Trust-owned beauty spot of Kinver Edge lies to the south-west of the village at 52°26’59"N, 2°14’31"W.[3] There are notable rock or cave houses on Kinver Edge, carved from the sandstone, some inhabited as late as the 1960s.[4] Some of the rock houses have been restored to their former inhabited states.[4]

Such rock houses were the setting of a book and silent film, Bladys of the Stewpony (1919, Sabine Baring-Gould), but most of this has since been lost. The "Stewponey" refers to an ancient inn (now demolished and replaced by flats) at Stourton in Kinver parish.

Just outside Kinver are Drakelow Tunnels. The tunnels were used for various purposes by the Ministry of Defence for many years.

During World War II the tunnels housed a factory which would have been used to build aircraft engines should the main supply factory in Birmingham ever have been bombed.

During the Cold War the tunnels were turned into an RGHQ (Regional Government Headquarters). In the event of Nuclear War Government officials, VIPs and heads of the regional military and emergency services would be housed here safely away from falling bombs and the effects of radiation and nuclear fallout.

Currently the site is disused, but a special trust has been set up to turn the site into a tourist attraction and to preserve a part of a 'secret military history' of the United Kingdom that few people knew about. Visits are sometimes arranged for interested parties.

Kinver Brewery was established in 2004. The brewery won the Champion Beer of Britain Gold Medal at the National Winter Ales Festival 2014 for "Over the Edge" in the Barley Wine and Strong Old Ale category.