Upper Arley is a village and parish in southern Staffordshire adjacent to the border with Worcestershire. It lies near Kidderminster in the latter county. The village had a population of 645 at the 2001 census.[1] 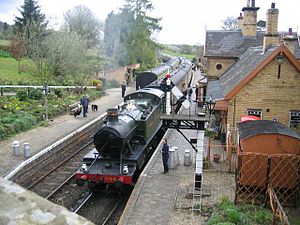 The railway station on the Severn Valley Railway, one of Britain's preserved steam railways, has been used in many films and television programmes (including the BBC's Oh, Doctor Beeching!). The station was opened in 1862 and closed by British Railways in 1963. It was reopened by the SVR in 1974. The village also has one pub, a tearoom and a post office with shop.

The parish is unusual in being divided into two unequal parts by the River Severn. Woodeaves (west of the river) was formerly only linked to the rest of the parish by a foot ferry, replaced in the 1960s by a footbridge.

The manor of Upper Arley had various owners before 1276, when it was bought by Roger de Mortimer in 1276. It passed down his family, who subsequently held the title Earl of March until 1448 when Richard Plantagenet, 3rd Duke of York sold it. It was bought by William Burley, whose daughter Joan married Thomas Lyttleton, whose descendants (spelling their name Lyttelton) also owned Hagley Hall and became Barons Lyttelton until the death of Thomas Lyttelton, 2nd Baron Lyttelton in 1779, when it passed to his sister Lucy and her husband, Arthur Annesley, 8th Viscount Valentia, later Earl of Mountnorris.[2] The manor was held by the Woodward family from 1853 to 1959. Captain Robert Woodward was killed in World War I in 1915. On the death of Sir Chad Woodward, on 2 February 1957, most of the estate was sold off for death duties. His widow continued to retain the rights and duties of the Lord of the Manor. [3]

The village of Upper Arley was an estate village, formerly owned in the early 19th century by the Earls of Mountnorris and the heirs, the Viscounts Valentia, from whom the village's second (and now defunct) pub took its name. In the late 20th century, it was owned by the philanthropist and iron & steel tycoon Roger Turner, who bought the estate after selling his family's Staffordshire tubemaking businesses, called the Wellington Steel Tube Co. Ltd. There are a number of subtle references or in-jokes to this legacy on the estate - a large redwood tree of the Wellingtonia variety stands very much out-of-place at the entrance to the manor house of Arley House, as does one by the footbridge across the River Severn in the village; and the estate buildings, be they commercial or residential, are coloured green and cream, the corporate colours of the Wellington companies. By 2000 and the death of Roger Turner, part of his private park was opened to the public as Arley Arboretum. Symbolically, Turner lies buried in the churchyard and next to the gate leading to the Arboretum and Arley House.