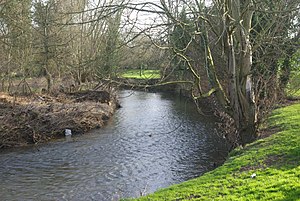 The River Arrow near Alcester

The River Arrow is a river of Worcestershire and Warwickshire, which is a tributary of the Warwickshire Avon.

The Arrow is a major tributary of the Avon. In the Dark Ages it may have given its name to one of the groupings listed in the Mercian Tribal Hidage, the Arosæte, albeit that this tribe might have been on the Herefordshire Arrow.

The river flows through Cofton Hackett, then it then feeds Lower Bittell Reservoir and escapes to run through Alvechurch before passing into Warwickshire just before the Arrow Valley Country Park in Redditch.

After Redditch the river flows through the river meadows at Studley, and then on through Spernall and past Coughton Court, a National Trust property, where it is forded by a minor road.

The Arrow then flows through the small market town of Alcester and is joined by its largest tributary the River Alne. The river continues south through the village of Arrow where it still drives the waterwheel at the converted Arrow Mill, and then through the small villages of Wixford and Broom.

The river joins the River Avon at Marriage Hill, near Salford Priors, right on the border of Warwickshire with Worcestershire.

In 1998 the river flooded for the first time since 1956 spilling over its defences and flooding a large part of Alcester.

The river burst its banks again during the night of 20/21 July 2007 flooding about 112 homes in Alcester. It breached the defences by Gunnings Bridge in Alcester and a large torrent of water flowed through the town and ponded about one foot deep at the bottom of the High Street and Stratford Road.