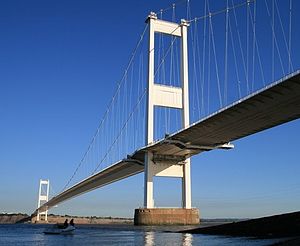 The Severn Bridge is a motorway suspension bridge spanning the River Severn between Aust and Beachley in Gloucestershire. There is however no junction at Beachley and the motorway continues onto the Wye Bridge which crosses the River Wye into Monmouthshire. Now classified as the M48, it was originally built as part of the M4 between London and Newport and took three and half years[1] to construct at a cost of £8 million.[2] It replaced the Aust ferry.

The bridge was opened on 8 September 1966, by Queen Elizabeth II, who hailed it as the dawn of a new economic era for South Wales. The bridge was granted Grade I listed status on 26 November 1999.[3] 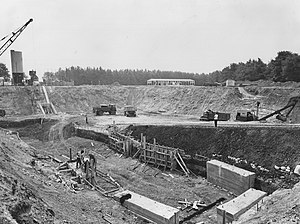 Construction of the Severn Bridge

The first proposal for a bridge across the Severn, approximately in the same location as that eventually constructed, was in 1824 by Thomas Telford, who had been asked to advise on how to improve mail coach services between London and South Wales. No action was taken, and over the next few decades the railways became the dominant mode of long-distance travel, with the Severn Railway Bridge at Sharpness being opened in 1879 and the main line Severn Tunnel in 1886. However, the growth of road traffic in the early 20th century led to further calls for improvements, and in the early 1920s Chepstow Urban District Council convened a meeting of neighbouring local authorities to consider a Severn crossing to ease congestion and delays on the A48 passing through the town. In 1935 Gloucestershire and Monmouthshire County Councils jointly promoted a Parliamentary Bill to obtain powers to build the bridge over the estuary, with 75% of costs to be met by the Ministry of Transport from the Road Fund. However, the Bill was rejected by Parliament after opposition from the Great Western Railway Company.[4] 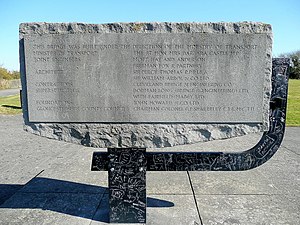 Monument showing the architects and constructors etc. of the bridge

After World War II, plans began to be made for a nationally-funded network of trunk roads, including a Severn Bridge, for which the contract was awarded to Mott, Hay and Anderson, with Freeman Fox and Partners. The public inquiry into the scheme was held on 24 September 1946 at Bristol University.[5] However, because Government funding was prioritised for the similar Forth Road Bridge (opened in 1964), construction of the Severn Bridge was not started until 1961: the UK government announced in 1962 that construction costs would be 'recovered' by means of a toll of 2s 6d on all vehicle crossings, though walking or cycling across the bridge would be charge-free.[5] The substructure was completed by contractors John Howard and Co. in 1963. The superstructure contract was awarded to Associated Bridge Builders Ltd (a joint venture of Sir William Arrol & Co., Cleveland Bridge & Engineering Company and Dorman Long) in 1963, and completed in 1966.[6] The tolls were removed on 17 December 2018.[7]

The Severn Bridge is located close to the former Aust Ferry. The bridge is a suspension bridge of conventional design, with the deck supported by two main cables slung between two steel towers. In 1966 the cables supporting the bridge deck were spun from 18,000 miles of wire.[5] The main cables, are each made up of 8,322 individual 5mm wires.[9] An unusual feature of the suspension cables carrying the deck is that they are not vertical, as for most suspension bridges, but rather arranged in a zig-zag fashion, with adjacent mounts closely spaced. The triangulation this offers is an attempt to reduce vibration, as is the prominent use of Stockbridge dampers on the cables. The bridge is 5,240 ft long, consisting of a 3,240-ft central span between the towers and the two 1000-ft side spans. The towers rise to 445 ft above mean high water and are of hollow box construction.[10] The deck is an orthotropic steel box girder of aerofoil shape with cantilevered cycle tracks and footway supported from the box. The shape of the bridge was determined by the designers Freeman, Fox and Partners following wind tunnel tests for the Forth Road Bridge, after the original wind tunnel model was accidentally destroyed. The sections of the deck were built at Fairfield-Mabey in Chepstow, and each 132-ton section was then floated down the river before being hoisted into position. 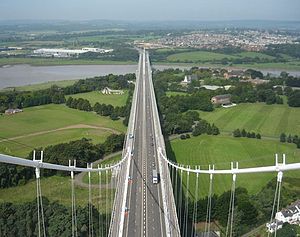 Beachley Viaduct stretching over Beachley Barracks and the Wye Bridge in the background.

The 2,444-ft Beachley Viaduct is also of similar box girder construction as the Severn Bridge but is supported on steel trestles as it crosses the Beachley peninsula.[8] The peninsula contains an army camp, which the bridge crosses. 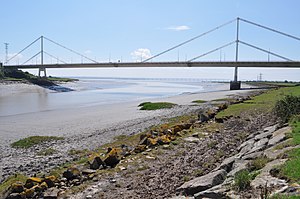 The Wye Bridge is a 1,340-ft-long cable-stayed bridge, which crosses the border marked by the River Wye between Gloucestershire and Monmouthshire, two miles south of Chepstow in the latter county. It consists of a single large cable stayed section with two single-leg pylons supporting the bridge deck from the centre of the roadway. The deck is an orthotropic box girder similar to the Severn Bridge but has a different appearance as it has two sets of cable stays on each of two towers. Originally there was only one set of cable stays but these were replaced during the strengthening works. The Wye Bridge was built by Cleveland Bridge & Engineering Company.[6]