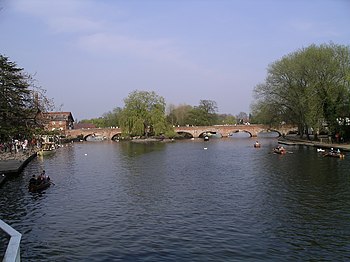 The Avon by the Royal Shakespeare Theatre, Stratford –upon-Avon

The River Avon is a Midlands river 85 miles long, flowing across the southern Midlands to the Severn. It rises just inside Northamptonshire and thence passes through of forms the borders of Leicestershire, Warwickshire, Worcestershire and finally Gloucestershire.

The river is one of several bearing the name Avon and to distinguish it from namesakes it is sometimes known as the Warwickshire Avon or Shakespeare's Avon, it has been conventionally divided since 1719 into the Lower Avon, below Evesham, and the Upper Avon, from its source down to Evesham.

Improvements to aid navigation began in 1635, and a series of locks and weirs made it possible to reach Stratford, and to within 4 miles of Warwick. The Upper Avon was tortuous and prone to flooding, and was abandoned as a navigation in 1877. The Lower Avon struggled on, and never really closed, although it was only navigable below Pershore by 1945.

Restoration of the lower river as a navigable waterway began in 1950, and was completed in 1962. The upper river was a more daunting task, as most of the locks and weirs were no longer extant. Work began in 1965 on the construction of nine new locks and 17 miles of river, using mainly volunteer labour, and was completed in 1974 when it was opened byQueen Elizabeth the Queen Mother. Plans to extend the navigable river to provide a link with the Grand Union Canal at either Warwick or Leamington Spa have met with some opposition.

The river has a total length of 85 miles and a catchment size of 1,032 square miles.[1] The Avon's tributaries include the Rivers Leam, Stour, Sowe, Dene, Arrow, Swift, Alne, Isbourne, Sherbourne and Swilgate as well as many minor streams and brooks.

The name "Avon" belongs to several rivers in the British Isles, of which two have particular fame; the Avon of Somerset, as the river of Bath and Bristol, and the Avon of Warwickshire as the river of Stratford-upon-Avon. Both are tributaries of the River Severn and both pass a small part of their course in Gloucestershire.

The name "Avon" is from Old Welsh, and simply means "River"; the modern Welsh for river is afon.

The river which flows through Warwickshire is also known, to distinguish it from the its namesakes, as the "Warwickshire Avon" or more romantically as "Shakespeare's Avon".[2] William Shakespeare was called "Swan of Avon" in Ben Jonson's eulogy to the bard.

The source of the Avon is near the village of Naseby in Northamptonshire, very close to the sources of the Rivers Cherwell, which flows south to the Thames, and Great Ouse, which flows east to the Wash. For the first few miles of its length between Welford and the Dow Bridge on Watling Street, The Avon forms the border between Northamptonshire and Leicestershire. On this section, it has been dammed to create Stanford Reservoir. It then flows in a generally west-southwesterly direction, not far north of the Cotswold Edge and on to the Vale of Evesham.

At Watling Street the river enters Warwickshire and then passes through Rugby, Wolston, (bordering Leamington Spa), Warwick and Stratford-upon-Avon, then on to Welford-on-Avon (Gloucestershire), Bidford-on-Avon (Warwickshire), and into Worcestershire, to Evesham and Pershore, before it enters Gloucestershire again and almost at once dissolves its waters in the River Severn at Tewkesbury.

A long-distance footpath has been created which follows the river from its source to the River Severn at Tewkesbury. The route is marketed as Shakespeare's Avon Way, and is 88 miles long. It uses existing footpaths and tracks to stay as close to the river as is reasonably possible.[3]

The river forms part of the Avon Ring, a circular cruising route which is 109 miles long, and includes 129 locks. From Tewkesbury it follows the course of the River Severn, the Worcester and Birmingham Canal and the Stratford-upon-Avon Canal to arrive back at the Avon at Stratford-upon-Avon. 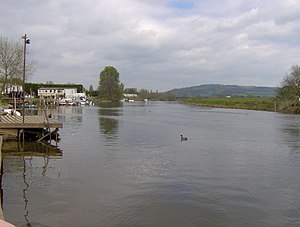 The Avon, from the garden of the Fleet Inn, Twyning 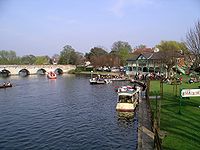 The Avon in Stratford on a sunny day