From Wikishire
(Redirected from Roman Road)
Jump to: navigation, search 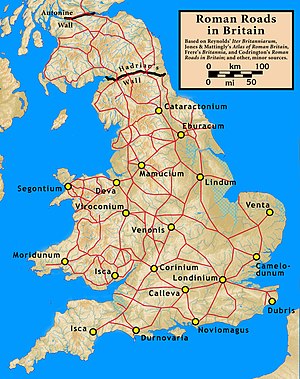 Map of the main Roman roads

The Roman roads of Great Britain were highways of the Roman Empire during the four centuries that Britannia was a Roman province. During the four centuries of Roman occupation, between AD 43 and approximately 410, the Roman Army constructed and maintained 2,000 miles of paved trunk roads throughout those parts of Britain thery controlled. Most of the known network was complete by AD 180.

The primary function of the road network, at least initially, was to allow the rapid movement of troops and military supplies. It also provided vital infrastructure for commerce and trade. Although many of the roads remained in use as core trunk routes for centuries after the Romans withdrew from Britain, the systematic construction of paved highways did not resume in England until the early 18th century. The Roman-road network was the only nationally-managed highway system which Britain had ever known until the establishment of the Ministry of Transport in the early 20th century.

There were long-distance routes before the Roman conquest, but not paved roads; before the invasion of Claudius, the roads of Britain were unpaved trackway. Some of these long-distance routes may have existed for centuries, following elevated ridge lines across hills, most famously the Icknield Way, and some indeed were reused by the Romans. Nevertheless, some recent research has shown evidence of road engineering by Britons during the first century BC.[1]

Beginning in 43 AD, the Romans quickly created a national road network. Key locations, strategic and administrative, were connected by the most direct routes possible. Main roads were gravel or paved]], bridges built in stone or wood, and inns built where travellers or military units could stop and rest. The roads' impermeable design permitted travel in all seasons and weather.

Following the withdrawal of the Romans, conventionally set at 410, the road system was not systematically maintained and slowly fell into disrepair. Parts of the network were retained and continued to form major routes in the Anglo-Saxon period, whilst other large sections were abandoned and lost. Such English names as Watling Street and Fosse Way were given to the routes in the Anglo-Saxon period. The word "street" in modern English is the Old English stræt, used to describe the Roman roads; the word is from the Latin stratum.

The central traffic hub, as today, was London, Roman Londinium and most important trunk roads were those that linked Londinium with:

From Chester and York, two key roads led to Hadrian's Wall, for most of the period the northern frontier of Britannia, where most of the three legions' auxiliary units were deployed.

Three important cross-routes were established early (by 80 AD) as the frontier of the Roman-occupied zone advanced:

Later a large number of other cross-routes and branches were grafted onto this basic network.

The major routes form the skeleton on which the road networks of later ages, even down to today, were built, and thus form an essential element of British geography.

Growth of the military roads network 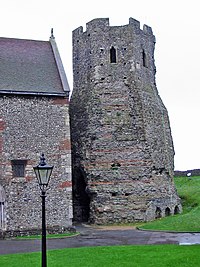 The earliest roads, built in the first phase of Roman occupation (under Claudius and Nero, 43–68 AD), connected London with the ports used in the invasion (Chichester and Richborough), and with the earlier legionary bases at Colchester, Lincoln (Lindum), Wroxeter (Viroconium), Gloucester and Exeter. The Fosse Way, from Exeter to Lincoln, was also built at this time to connect these bases with each other, marking the effective boundary of the early Roman province.

During the Flavian period (Vespasian, Titus and Domitian 69–96 AD), the roads to Lincoln, Wroxeter and Gloucester were extended to the new (and definitive) legionary bases at York, Chester and Caerleon respectively. By 96, further extensions from York to Corbridge, and from Chester to Carlisle and Caernarfon (Segontium), were completed as Roman rule was extended into the western mountains and into the Pennines. Stanegate, the military road from Carlisle to Corbridge, was built under the Emperor Trajan (98–117 AD) along the line of the future Hadrian's Wall, which was constructed by his successor Hadrian in 122–132 AD.

Caledonia, and all the lands north of Hadrian's Wall, remained mostly outside the boundaries of the province of Britannia; the Romans never succeeded in subjugating the entire island, despite a serious effort to do so by governor Gnaeus Julius Agricola in 82–84 AD. Nevertheless, the Romans maintained a system of forts in the lowland region between about 80 and 220 AD to control the indigenous population beyond Hadrian's Wall and the Empire annexed the Lowlands briefly with the construction of the Antonine Wall in 164. This barrier, across the 'neck' of the land, from the Firth of Clyde to the Firth of Forth, was held for some twenty years.

There was also a certain road beyond the Antonine Wall to Perth (Bertha) from the Antonine fort at Falkirk. Indeed it has been thought that the Roman road to the north of the Forth, to Stirling and Perth, dates from the expedition of Septimius Severus to beyond the Dee, AD 209; it may, however, be doubted whether there was time in that campaign for such a work, and the road may well belong to a period before the construction of the Antonine Wall, AD 140.[2]

The core network was complemented by a number of routes built primarily for commercial, rather than military, purposes.

Examples include: in Kent and Sussex, three certain roads leading from London to the important iron-mining area of the Weald; and in East Anglia, the road from Colchester to Norwich, Peddars Way and the Fen Causeway. However, these eastern and southern routes acquired military importance from the 3rd century onwards with the emergence of Saxon seaborne raiding as a major and persistent threat to the security of Britannia. These roads linked to the coastal defensive line of Saxon Shore forts, for example Brancaster (Branodunum), Burgh Castle (Gariannonum) near Great Yarmouth, Lympne (Portus Lemanis) and Pevensey (Anderitum).