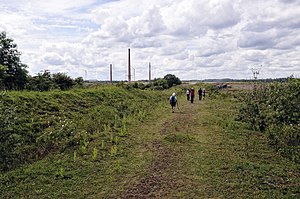 The Fen Causeway west of Whittlesey

Thee Fen Causeway or the Fen Road is the modern name for a short Roman road in the Great Fen, which runs between Denver in Norfolk in the east and Peterborough in Northamptonshire in the west.[1][2] For much of its course, this is not a straight road such as we associate with the Romans but has to respect the reality of the fenland marsh.

The course of the road is 24 miles long, through three counties. With its western end approximately at Peterborough at the edge of Northamptonshire. It runs east across Flag Fen in Cambridgeshire and crosses the modern course of the River Nene to run through the north of Whittlesey. Eastward of here the course is obscured, but it has been traced to the hamlet of Eldernell and across the Twenty Foot River and turning southeast to Westry and the north edge of March.

At its western end it is possible that the road or an extension of it met the major Roman north-south route, Ermine Street, west of modern-day Peterborough. Thus there would have been a link from the Midlands to the eastern lands beyond the fen.

In the east, it is possible that the route continued east of Denver to meet Peddars Way at Castle Acre, but the evidence for this is less certain.

The road is thought to have been raised above the marshy fens using gravel, with a width of up to 60 feet. Towards its western end it is close to the Bronze Age route across Flag Fen. At that archaeological site, which is open to visitors, a section through the Roman Road can be seen.