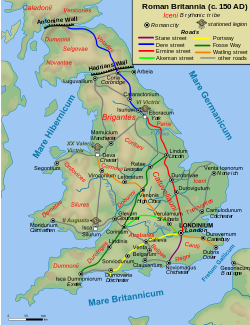 Dere Street or Deere Street, was a Roman road between Eboracum (York) and the Firth of Forth or at its greatest estimate extent, to the Roman fort at Inchtuthil, north of the River Tay in Perthshire. It stretches therefore, perhaps some 226 miles.

The route still exists in the form of the route of many major roads, including the A1 and A68 just north of Coria (Corbridge).

The name given to the road corresponds with the Dark Age Anglo-Saxon kingdom of the Deirans (Dere), through which the first part of its route lies. It was sometimes referred to as "Watling Street" and marked on some maps as such, which cause it to be confused with the Watling Street that linked Dover with Wroxeter. 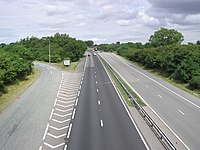 The route began at York[1] and crossed the River Ure near Isurium Brigantum (present-day Aldborough close to Boroughbridge). From there, it crossed the River Swale near Catterick, a garrison town then as now, where the Roman fort was called Cataractonium. 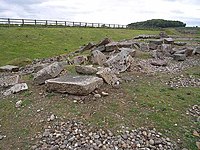 Dere Street went on to cross the River Tees near the Roman fort of Piercebridge by a stone arch bridge: These are relatively rare in Roman Britain,[2] except for Hadrian's Wall and Dere Street. The original bridge at Piercebridge was replaced by another on a different alignment, and there is some evidence for other minor realignments of Dere Street over the Roman period.[3] Raymond Selkirk has suggested that the supposed remains of a Roman stone bridge on the south side of the Tees at Cliffe are remains of a jetty, and archaeological television programme Time Team investigated this in 2009.[4][5] In 1994, a section through Dere Street was exposed by excavations carried out in a garage development area at Cliffe, and some pottery and tile found.[6][7]

Bishop Auckland to the Cheviot Hills 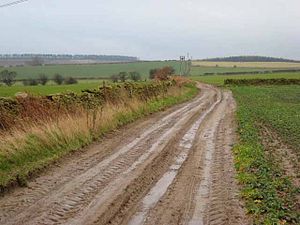 The next river crossing was of the River Wear at the Roman fort of Vinovia, near present-day Bishop Auckland.[8] At this point another road branched away to the right, heading for Durham, Chester-le-Street and eventually crossing the Tyne at Pons Aelius (Newcastle upon Tyne).[9]

From Vinovia, Dere Street travelled onwards past the Roman forts of Longovicium (present-day Lanchester) and Vindomora (Ebchester), before crossing the River Tyne near the fort of Coria (Corbridge), where it crossed Stanegate.[10][11] Just North of Corbridge, the route passed through the fortifications of Hadrian's Wall, at a point now known as Portgate, and passed into lands that were only tenuously under Roman domination.[12]

From the Wall, the route continued north into Redesdale and thence to the Cheviot Hills, where there are the remains of marching forts at Fourlaws, Habitancum (West Woodburn), Bremenium (Rochester), and at Chew Green.[12]

Cheviots to the Forth 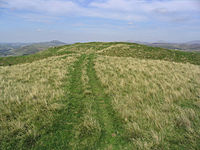 The A68 follows close to the route of Dere Street through the Cheviots, by way of Carter Fell; on the fell are the remains of a camp at Pennymuir[13] and well preserved sections of the road as it also forms part of St Cuthbert's Way to Trimontium near Melrose. Crossing the River Tweed at Trimontium, the route follows the Leader Water to the foot of the Lammermuirs, where there is evidence of forts near Oxton and another well preserved section of road rises through the Lammermuirs over Soutra hill, and then on to the Votadini stronghold of Din Eidyn; Edinburgh. Here the Romans held strategic garrisons at Cramond and at Inveresk to access the eastern end of the Antonine Wall.[14] 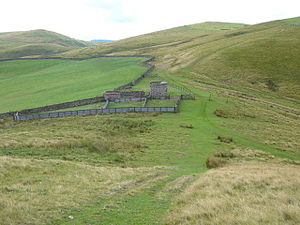 Dere Street in the Cheviots

In the High Middle Ages, the section of the route between Jedburgh and Edinburgh was known as the Via Regia or royal way. The Via Regis connected the larger part of Scotland with the important ecclesiastic sites of the border shires. King Malcolm IV established his Church and Hospital of the Holy Trinity halfway along this section to provide succour for the many pilgrims using it.[15]

After the destruction of the Border Abbeys during "The Rough Wooing" by the Earl of Hertford's forces of Mary, Queen of Scots, and the Reformation of the Church of Scotland, the route fell into disuse and disrepair; and it was used mainly for driving livestock, and the occasional travellers daring enough to venture into the lawless border region.[16] 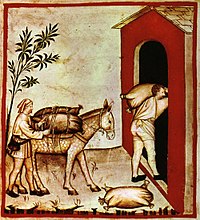 Dere Street continued in use between Durham and York in mediæval times. Being limited by daylight, "about thirty miles in a day in winter on horseback and between thirty-six and forty in summer was what a man could do." Tough, vigorous men could walk from Darlington to York, and it was said that the quality of a horse could make the difference between a possible thirty and fifty miles per day. A wish to hear mass or the organisation of a train by the rich could shorten the travelling day to twenty miles.

Roads were described as so muddy and difficult between November and February that to finish the journey by daylight one could barely stop to eat; however a "royal highway" or alta via regia strata was passable in winter between York and Durham, and this could have been Dere Street. Heavy packhorse loads were taken on the route, for example 20 stone of wool. Clerics, traders and the nobility were more likely to travel than others, and some people rarely travelled at all. Travelling in style involved the use of carts for luggage, but carts bogged down in winter mud, so traders with packhorses travelled more easily in winter than the rich.[17]