Not to be confused with Stane Street (Chichester) 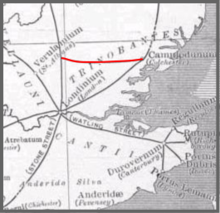 Stane Street is a 39-mile Roman road that runs from Ermine Street at Braughing in Hertfordshire to Colchester in Essex.[1]

Some have sought to trace the route back across Hertfordshire as far as Watling Street, at St Albans, which would increase the length to 57 miles.

Stane Street can be traced easily on an Ordnance Survey map as much of it has been incorporated into modern-day roads, or still exists as paths, byways and tracks: