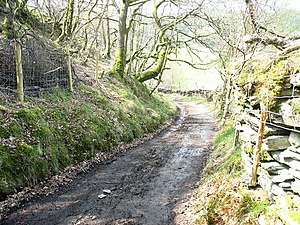 A section of Sarn Helen near Betws-y-coed.

Sarn Helen is a collective name for several stretches of Roman road in the Cambrian Mountains. The 160-mile route, which follows a meandering course through the mountains, connects the Conwy Valley in the north with Carmarthen in the south.[1] Despite its length, academic debate continues as to the precise course of the Roman road. Many sections are now used by the modern road network while other parts are still traceable. However there are sizeable stretches that have been lost and are unidentifiable.

In the north the route is believed to follow the western bank of the River Conwy from Canovium, a fort at Caerhun, passing through Trefriw, then leading on to Betws-y-Coed, with a branch leading to Caer Llugwy near Capel Curig. The route then passed through Dolwyddelan, running up Cwm Penanmen and past the higher parts of Cwm Penmachno. The route then leads on past Llan Ffestiniog to the Roman fort of Tomen y Mur, near Trawsfynydd before continuing south towards Dolgellau.

South of Dolgellau the route passes over Waen Llefenni into Cwm yr Hengae to Aberllefenni. Part of the narrow-gauge Corris Railway between Aberllefenni and Maespoeth Junction may run along the line of the Sarn,[2] and the modern A487 trunk road between Corris and the River Dovey may follow its route. It probably crossed the Dovey by a ford or ferry near the Roman fort at Pennal.

In Cardiganshire Sarn Helen runs as part of a B-road in Bronant, and six miles south there is a long stretch through the hamlet of Stag's Head. It passes down to Llanio where there was a small Roman fort named Bremia, and crosses over to Dolaucothi before reaching Llandovery. The route survives as a minor road here, although severely affected by potholes where it crosses the mountains.

A further section of Roman road leading north-eastwards from Neath (Roman 'Nidum') to Banwen at the southern edge of the Brecon Beacons National Park is also known as Sarn Helen. It continues north-eastwards through the park to the north-west of Ystradfellte, beneath Fan Frynych, and then across Mynydd Illtud en route to the Roman fort of Y Gaer, Brecon (Roman 'Cicucium').

A long-distance mountain bike route named the Sarn Helen Trail follows parts of the road's course.[3] The 270 miles trail, which was devised in 1996, runs between Conwy on the Irish Sea coast and Worms Head on the Gower Peninsula.[4]

The road gives its name to the annual Sarn Helen Hill Race that starts and finishes in Lampeter in Cardiganshire. The 16½ -mile multi-terrain race, which was founded in 1980, takes place in May each year. It claims to combine "the speed of road racing with the rigours of cross country and fell running over a challenging picturesque course".[5]

"Sarn Helen" is the title of a 1997 sequence of poems by John Wilkinson, named after the Roman road.