Newington is an ancient parish that forms a district of Metropolitan Surrey, just south of the River Thames. It was the site of the early administration of the county, and is now the site of Inner London Crown Court. The parish of Newington St Mary contained all of the manor of Walworth. With the creation of the Surrey County Sessions House at Newington Causeway in 1792 Newington was the County town, until Kingston upon Thames was designated as such in 1893.

The name means "new farmstead" or the newer part of the manor of Walworth but because of its position on the principal road to the south-coast (Stane Street) subsumed it. The first mention of Newington (or Neweton) occurs in the Testa de Nevill (a survey of feudal tenure officially known as the Book of Fees compiled 1198–1242) during the reign of Henry III, wherein it is stated that the queen's goldsmith holds of the king one acre of land in Neweton, by the service of rendering a gallon of honey.[2] In 1313 it is mentioned again in the Archbishop of Canterbury's Register as Newington juxta London.[2] The name survives now in the street names Newington Causeway and Newington Butts and in the open space Newington Gardens, formerly the location of Horsemonger Lane Gaol from 1791. Newington Ward is one of three local council wards covering the area from the West side of Walworth road up to the border with Lambeth. 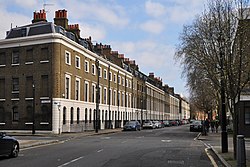 The area remained as a farming village with a low level of population until the second half of the 18th century. There was a little industry, for example, the manufacture of clay pipes for tobacco smoking. In William Shakespeare's time, there was a theatre called Newington Butts and later there were further theatres. Newington gained in importance with the creation of the Westminster Bridge in 1750 and the associated improvements of London Bridge which required a series of new roads across St George's Fields to interconnect the routes from them and allow traffic from the Georgian West End to travel south and to Southwark without transitting through the City. These routes were Westminster Bridge Road and Borough Road for the West End and Southwark; for the route to the south London Road and St George's Road supplemented and by-passed the Borough High Street and Newington Causeway]]. All of these roads converged at a junction where there was a blacksmith's forge and inn called Elephant and Castle which then became a name to signify the area. Traffic heading to the south-east from the West End was connected to the older route from the City of London and Southwark to Kent as New Kent Road from Newington to a junction with the older route at the Bricklayers Arms. New roads brought development opportunities. The local landowner, Henry Penton (MP for Winchester), started to sell some of his farmland. The 19th century brought more dense speculative house building, and some philanthropic provision too. The Trinity House Newington Estate, laid out on property the institution was left in the seventeenth century, became a high class residential district which is still largely in existence. It was built around an 1820s classical church by Francis Octavius Bedford.

Further urban stimulus was given by the arrival of mainline railway routes from the City to the south, the London, Chatham and Dover Railway built a station at Elephant and Castle in 1863. In 1890 the City and South London Railway (now the Northern line City Branch of London Underground) was projected through the area with stations at what was termed 'Kennington' (but in fact within Newington) and also at Elephant. In 1906 the new Bakerloo line terminated at the Elephant also.

In addition, as the population of neighbouring areas increased, parts of Newington parish were included in new parishes: