Water Newton is a village on the northern border of the county of Huntingdon, between the River Nene and the A1 trunk road.

It is a quiet village, but close by in ages past there was a major Roman town, Durobrivae, now just a large, low mound in the meadows by the Nene. The industrial site of Normangate Field adjoined Durobrivae and was, amongst other things, the centre of a major pottery industry. An indication of the wealth of this town is the Water Newton treasure which can be seen in the British Museum.

The Old Rectory is a Grade-II listed building on the Old Great North Road. It was originally the rectory but now a private house. It was built in the early 18th century (with later additions, in particular of the 19th century. It retains original cornicing.

Partly within the parish is the site of the Roman town of Durobrivae Catevvelorum, sited where Ermine Street crossed the Nene. Durobrivae was grew up as a settlement serving a fort, but it became an important regional capital. Town walls were built in the second century and the town was intensively occupied and often re-built.

The town though disappeared after the Roman withdrawal. In the Anglo-Saxon period the site was known as Dormceaster. In later years it was known as "Dornford" and then "Dornford Ferry", when all that was left was a ferry crossing here, but even that hamlet has gone now.

Cup from the Water Newton Treasure

During ploughing in February 1975, a hoard of 4th century Roman silver was discovered, which is known as the 'Water Newton Treasure'. The hoard included six silver vessels, two of them inscribed with Christian dedications, seventeen silver votive plaques and a gold disc bearing Christian symbols. This hoard is dated to the fourth century and apparently belongs to a time of Christian persecution.

The treasures were most likely buried by an inhabitant of the nearby garrison town of Durobrivae. The silver plates and bowls, votive tokens engraved and embossed with the labarum (the chi-rho cross), and an unengraved standing two-handled cup of the form (cantharus) later used as chalices comprise the earliest group of Christian liturgical silver yet found in the Roman Empire. Due to the importance of this find, it is now in the British Museum, with replicas at Peterborough Museum. 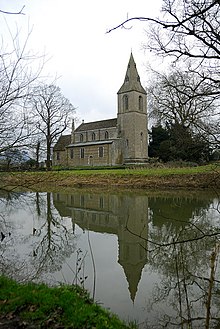