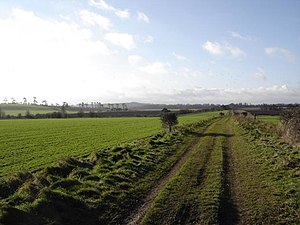 The Portway was a Roman road running through Hampshire and Wiltshire, from Calleva Atrebatum (Silchester) to Sorviodunum (Old Sarum).

The Portway covers a distance of 36 miles from Calleva Atrebatum (Silchester) to Sorviodunum (Old Sarum).[1][2] It was one section of the route running from Londinium (London) to Durnovaria (Dorchester).

Halfway along the Portway, at East Anton just outside Andover, the road crossed another major Roman road, Ermin Street, which ran from Venta Belgarum (Winchester) to Cunetio (Mildenhall) and Corinium Dobunnorum (Cirencester).[1] The crossroads at East Anton provided the nucleus for a small town which formed after the two roads were built.[3]

Between the two towns are two prominent and intervisible high points: Cottington's Hill, from which Silchester can be seen, and Quarley Hill, from which Old Sarum can be seen.[3] It is likely that these two high points provided the necessary locations for surveying the road.[3] A section of the road in excellent preservation was carefully examined close to the Amesbury branch railway where the agger is very clear.[4] In the construction the surface soil had been cleared away, and a layer of chalk rubble laid down and cambered to give a thickness of 18 cm at the centre.[4] Upon this was a layer of large flints, 3-4 inches thick, which was topped with a layer of local gravel 12 inches thick and well cambered.[4] There were V-shaped ditches on each side of the road 32 feet from the south kerb and 34 feet from the north kerb, making a total width for the road zone of 84 feet to the ditch centres.[4]