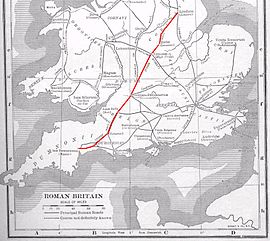 The Fosse Way was a major Roman road, 230 miles long, running southwest to northeast from the West Country and all across the Midlands. It linked Exeter (Isca Dumnoniorum) in Devon to Lincoln (Lindum Colonia) in Lincolnshire, via Ilchester (Lindinis), Bath (Aquae Sulis), Cirencester (Corinium Dobunnorum) and Leicester (Ratae Corieltauvorum). Much of the route is today marked with modern roads.

The word Fosse is derived from the Latin fossa, meaning ditch. For the first few decades after the Roman invasion of Britain in AD 43, the Fosse Way marked the western frontier of Roman rule in Iron Age Britain. It is possible that the road began as a defensive ditch that was later filled in and converted into a road, or possibly a defensive ditch ran alongside the road for at least some of its length.

This is remarkable for its extremely direct route: from Lincoln to Ilchester in Somerset, a distance of 182 miles, it is never more than 6 miles from a straight line between the two.

Many sections of the Fosse Way form parts of modern roads and lanes, and parish, district or county boundaries.

Several place names on the route have the suffix -cester or -chester, which is from the Latin castra meaning military camp. Some settlements are named after the road itself, such as Fosse-, or -on-Fosse, while others have a more generic form, such as Street, Strete, -le-Street, Stratton, Stretton, Stratford, and Stretford, from the Latin strata, meaning paved road. The route runs from 50°43’48"N, 3°28’48"W in Exeter to 53°13’48"N, 0°32’24"W in Lincoln.

Between Lincoln and Leicester the A46 follows the route of the Fosse Way. The A46 deviates from Fosse Way at East Goscote, to follow the Leicester Western Bypass. The original alignment, which is still visible as an unclassified road called Fosse Way, passes through Syston, continuing as the minor road Melton Road through Thurmaston, before merging with the A607 (the old A46), continuing into the city centre on the old alignment, first as Melton Road then Belgrave Road and Belgrave Gate.

The alignment terminates at the Clock Tower in Leicester, and picks up again at Narborough Road (the A5460), on the other side of the River Soar. A 19-mile stretch of the road between Widmerpool & Newark-on-Trent has been upgraded to a Dual-carriageway which was completed in 2012. The new route deviates in several sections off the historic road line. 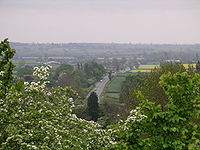 Fosse Way from the top of [Brinklow Castle, Warwickshire

South of Leicester, apart from a short deviation near Narborough where the original course is no longer visible, the B4114 (originally the A46 but renumbered when the M69 was opened) follows the route. A short distance north of the A5, the B4114 diverges from the line of the Fosse Way to pass through the village of Sharnford, while for 2 miles the route of the Fosse Way is followed by a minor road, named 'Roman Road' which, although single track, runs along a much wider and slightly domed strip of land with deep ditches either side (the agger). The modern road ends at a picnic site car park, and a further mile and a half southwards can be explored on foot.

The junction of Fosse Way with Watling Street, now the A5, is at High Cross (Venonis). Watling Street is the county boundary between Leicestershire and Warwickshire.

The Fosse Way follows the B4455 across Warwickshire, through Street Ashton, Stretton-under-Fosse, Brinklow, Bretford, Stretton-on-Dunsmore, Princethorpe and the site of a Roman town near Chesterton,[1] until it joins the A429 near the boundary with Gloucestershire.

Through Gloucestershire, the route follows the A429 through Stretton-on-Fosse, Moreton-in-Marsh, Stow-on-the-Wold, Northleach and Fossebridge, to Cirencester, where it crosses Akeman Street and Ermin Way. 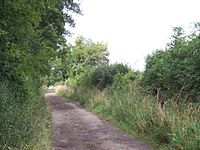 Section as a byway north of the M4

South of Cirencester the Fosse Way follows a short section of the A433, then the modern roads depart from it and it is to be traced across open country.

The road crosses the River Thames and under the railway – the Golden Valley Line which was constructed via Gloucester. The road continues and later forming the county boundary between Gloucestershire and Wiltshire, across the old airfield at RAF Kemble, then becomes fragmented sections of country lanes; two sections on this stretch are byways rather than maintained roads, and at points on these routes it widens to as much as 60 feet.

The road passes near the Iron Age hill fort of Bury Camp and becomes another section of the county boundary, crossing second the South Wales railway which is the South Wales Main Line, next the site of an old chapel and spring at Fosse Lodge in Dunley, and then the M4. Thereafter it passes through The Shoe and Nettleton Shrub where remains of a posting-station have been found, and arrives at Batheaston. Thereupon it turns due west to follow the river Avon into Bath: Aquae Sulis.[2]

Between Bath and Shepton Mallet the line of the Fosse Way follows parts of the A367, through Clandown, Radstock, Westfield and Stratton-on-the-Fosse. It runs across open country and farm tracks parallel to the A37 north of Shepton Mallet, near the Iron Age hill fort of Maesbury. At Beacon Hill south of Oakhill, it crossed the Roman road along the Mendip ridgeway from Old Sarum to the lead and silver mines at Charterhouse. The Fosse Way passes through the eastern suburbs of Shepton Mallet on a short stretch of the A361 to Cannard's Grave, where it picks up the A37.

The Fosse Way follows the A37 through Street-on-the-Fosse and Lydford-on-Fosse on a direct route to Ilchester. The route leaves the A37 at the A303 junction just north of Ilchester, and follows a small track, before picking up the B3151 through the town.

The Roman road from Ilchester to Dorchester continues on the line of A37 through Yeovil to the south east. Other minor Roman roads lead from Ilchester and Lydford-on-Fosse towards Street and the A39 route along the Polden Hills, leading to Roman salt works on the Somerset Levels, and ports at Combwich, Crandon Bridge and Highbridge.

After Ilchester the Fosse Way is followed by a section of the A303 under the ramparts of the Iron Age hill fort of Ham Hill, occupied by the Legio II Augusta, the Second Legion, after the conquest of the Durotriges in Dorset.

The alignment leaves major roads after Petherton Bridge[3] over the River Parrett, and follows country lanes to Over Stratton and Dinnington (where in 2002 members of the Channel 4 television programme Time Team uncovered a mosaic next to the road).

The route crosses a stream called Stretford Water, climbs the ridge, and follows a short section of the A30 at Windwhistle Hill. Then it turns on to the B3167 through the hamlets of Street and Perry Street, joins the A358, crosses the River Axe at what used to be called Stratford (now called Weycroft), and on to Axminster.

Now we come to the difficult question of where the Fosse Way ends. There are further alignments on the A358 at Ball's Farm and Musbury south of Axminster, which imply a Roman road did continue along the River Axe toward Axmouth and Seaton. (These sections are labelled Fosse Way on Ordnance Survey maps.)

However, the main route for Exeter would have followed the Dorchester road west from Axminster to Honiton. The crossroads in Axminster was controlled by a Roman fort at Woodbury Farm, now on the southern edge of the town. The route to the west crosses the Rivers Axe and Yarty to Kilmington, continuing on segments of the A35 and minor local lanes to Honiton.

From Honiton the route leads south-west along the old A30, to Strete Ralegh, where there is a short break, then a clear alignment along a minor road towards Exeter.

It is also likely that one or more side roads split from the Fosse Way at Lopen Head or Dinnington, passing around Ilminster, then following the line of the current A303/A30 from Horton to Honiton. For example, there are villages called Crock Street and Street Ash on or near these routes. So in the later years of Roman occupation, there would probably have been a choice of routes from Ilchester to Honiton.