From Wikishire
(Redirected from National Eisteddfod)
Jump to: navigation, search 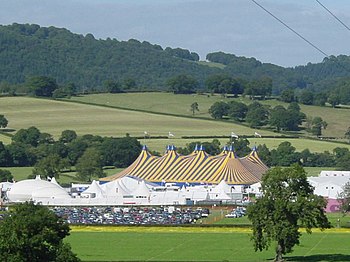 The maes and the Pafiliwn ("Pavilion")

The Royal National Eisteddfod of Wales (Eisteddfod Genedlaethol Frenhinol Cymru) is the most important of several eisteddfodau that are held annually, mostly in Wales though not exclusively. The Eisteddfod Act of 1959 allowed local authorities to give financial support to the event.

An eisteddfod is a poetry competition or festival, the Welsh word literally meaning "session", from eistedd meaning "sitting"; the plural is eisteddfodau. Local eisteddfodau have been a part of village life for centuries in Welsh-speaking villages, but the idea of an eisteddfod for all Wales is of the late eighteenth century. The Royal National Eisteddfod of Wales was founded (as the "National Eisteddfod" in 1867 and has been held every year since then. It is the greatest literary festival held in the Welsh language.

The events of the Eisteddfod

The 1958 winner of the Crown, in Ebbw Vale with the Archdruid 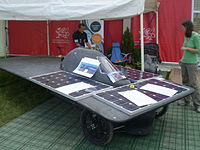 The Eisteddfod is traditionally held in the first week of August and the competitions are all held in the Welsh language.

The Chairing of the Bard and Crowning of the Bard ceremonies are the highlights of the week, and are presided over by the Archdruid. Other important awards include the Prose Medal (first introduced in 1937).

Hundreds of tents, pavilions and little stands are erected in an open space to create the maes (field). The space required for this means that it is rare for the Eisteddfod to be in a city or town but instead it is held somewhere with more space. Car parking for day visitors alone requires several large fields, and many people camp on the site for the whole week. The festival has a heavy druidic flavour, with the crowning and chairing ceremonies for the victorious poets being attended by bards in flowing white costumes, dancing maidens, trumpet fanfares and a symbolic Horn of Plenty. However, the provenance of this ceremony is not ancient custom but Georgian and Victorian romanticism: it owes its existence within the Eisteddfod structure to Iolo Morganwg, whose Gorsedd ceremonies were adopted by the Eisteddfod from 1819. Nevertheless, all the ceremonial is taken very seriously, and an award of a crown or a chair for poetry is a great honour.

If no stone circle is there already, one is created out of Gorsedd stones, usually taken from the local area. These stone circles are icons all across Wales and signify the Eisteddfod having visited a community. As a cost-saving measure, the 2005 Eisteddfod was the first to use a temporary "plastic stone" circle for the druidic ceremonies instead of a permanent stone circle. This also has the benefit of bringing the Gorsedd ceremonies on to the maes, as they were often held many miles away, unbeknownst to much of the public. The ceremonies may still be held elsewhere if the weather at the maes is not suitable.

As well as the main pavilion with the main stage, there are other venues through the week. Some are fixtures every year, hosting concerts (Maes B), plays and shows (Maes C). Other fixtures of the maes are the Pabell Lên (literature pavilion), the Neuadd Ddawns (dance hall), the Pabell Wyddoniaeth a Thechnoleg (science and technology pavilion), the Pabell y Dysgwyr (learners' pavilion), at least one theatre, and hundreds of stondinau (stands and booths) where groups, societies, councils, charities and shops exhibit and sell. Some eisteddfod-goers never go near the main pavilion, but spend their time wandering the maes and meeting friends. Since 2004, alcohol has been sold on the maes: previously there was a no-alcohol policy. Local theatres are likely to time Welsh-language productions for around the time of the Eisteddfod, hoping to benefit from the influx of visitors.

The Eisteddfod meets in a different place each year, the locations chosen some years in advance but officially proclaimed a year in advance. At the proclamation, the themes and texts for the competitions are published. The organisation for the location will have begun a year or more earlier, and locations are generally known two or three years ahead.

Local poetry festivals known as eisteddfodau have been held in Wales for many centuries. The “National Eisteddfod” was founded in 1861, and developed its traditions from there.

In 1789, Thomas Jones of Corwen decided to found an eisteddfod for Welsh culture and language as a whole, inspired by the little local eisteddfodau he saw being held in the taverns, and to this end he sought money from a London society called the Gwyneddigion; a society of Welshmen living in London. The society drew up a pattern which has been followed ever since; judges properly chosen and poetic subjects laid down for competitors to follow, and the poets were to compete under pseudonyms. The first Gwyneddigion Eisteddfod was held in Bala in 1789, and the subject for the chair was "A Reflection on the Life of Man". However 1789 was also the year of the French Revolution, and the wards that followed swallowed a generation and the Gwyneddigion Eisteddfodau faded out. Only 1819 was a new "Provincial Eisteddfod" created and these continued for many years. That in Beaumaris in 1832 was attended by Princess Victoria, later to become Queen.[1]

the National Eisteddfod of Wales as an organisation traces its history back to the first event held in 1861, in Aberdare.[2][3]

Of the first Eisteddfod in 1861, the North Wales Chronicle reported:

A spacious marquee with seats to contain 6,000 people had been specially created for the occasion on Hirwaun Common, near the town, at an expense of several hundreds of pounds. But on Sunday last, during the prevalence of a strong westerly gale, the noble structure, with the roofing and supports, was completely destroyed, and the whole expensive decorations exposed to the merciless storm, which was at its height about one o'clock the same day. The scene of the debris was most discouraging to those who had bestowed so much attention upon the building, and their hopes for a time entirely disappeared. However, the patriotic spirit of the promoters was not in the least daunted and they at once employed a large force to convey the materials to the Market Hall, where it was decided the meeting should take place.[4]

One of the most dramatic events in Eisteddfod history took place in 1917. The chair was awarded to the poet Ellis Humphrey Evans, whose bardic name was Hedd Wyn, for his poem Yr Arwr (The Hero). The winner was announced, and the crowd waited for the winner to stand up to accept the traditional congratulations before the chairing ceremony, but no winner appeared. It was then announced that Hedd Wyn had been killed the previous month on the battlefield in Belgium. The chair was left draped in black. These events were portrayed in the Oscar-nominated film Hedd Wyn.

The 1940 Eisteddfod was not held in the traditional sense, due to fears that it would become the target of bombing during the Second World War. Instead, an Eisteddfod Radio programme was aired on the BBC and the Chair, Crown and a Literature Medal (as opposed to the usual Prose Medal) were awarded.[5]

The Eisteddfod is held primarily in Welsh, but it was not always a bastion of the Welsh language. Until the 1950s, the English language was more prominent on the stage and Welsh had been fading away for the hundred years since the foundation of the event, so that the Eisteddfod was really just another provincial literary festival. In 1950 though at Caerphilly "the Welsh principle", came into operation and thereafter literature in the Welsh language was to predominate.

Nevertheless, English is the language of the vast majority and has not been banished from the Maes and many of the events around the Eisteddfod and its stalls are held in English.

Gorsedd of the Bards of the Isle of Britain

The Gorsedd was once an independent event but now forms a central part in the Eisteddfod. Its full name is the Gorsedd of the Bards of the Isle of Britain (Gorsedd Beirdd Ynys Prydain), and it has its own long and interesting history dating back to the end of the eighteenth century, when it was founded by Edward Williams, better known today as Iolo Morganwg.

Edward Williams was an overly romantic academic from Llancarfan in Glamorgan. He created the "Gorsedd of the Bards of Britain" in 1792 on the strength of ancient manuscripts asserting the existence of the Gorsedd from ancient times; Williams was a prolific forger. He held his first Gorsedd on Primrose Hill in Middlesex in 1792, with the aim of reasserting the Welsh claim to the culture and heritage of the ancient Celts. The Gorsedd was first linked to the Eisteddfod in 1819, at the Carmarthen Eisteddfod, and since the creation of the "National Eisteddfod" in 1861, the two have worked together such that the Gorsedd plays an important role at the Eisteddfod.

The Gorsedd is presided over by an Archdruid. Its members are known as "druids" and consist of poets, writers, musicians and artists, who either join when they win one of the Eisteddfod’s main competitions, sit an exam or when they are awarded a degree in Welsh or Music from a Welsh university. The Gorsedd each year honours those whom it deems to have contributed to the life of Wales or the Welsh language and those who have worked for the Eisteddfod.

Monday is the Crowning Ceremony; on Wednesday, the Eisteddfod and the Gorsedd honours the winner of the Prose Medal, and the Chairing of the Bard ceremony is held on Friday. The Gorsedd escort the winning bard or writer – if there is a winner – from the Pavilion and around the Maes. This is an opportunity for the public to enjoy the splendour of the Gorsedd and congratulate the successful winner.

Traditionally the Eisteddfod alternates between northern and southern shires of Wales and the decision to hold both the 2014 and 2015 Eisteddfodau in Carmarthenshire and Monmouthshire respectively was seen as controversial for breaking this usual pattern, so 2015's was moved to Montgomeryshire. On several occasions the Eisteddfod has been held outside Wales.[2]