Treorchy is a town in Rhondda Fawr valley in Glamorgan.

Treorchy is said to take its name from the stream that flows from the mountainside above the village into the River Rhondda; the 1875 Ordnance Survey map of the area refers to the stream is referred to as ‘Nant Orky'. The word Gorchi possibly comes from the Welsh word Gorchwy, suggesting a stream marking a boundary. Prior to industrialisation the tithe maps of the area show an unpopulated area of scattered farmhouses, such as Abergorchwy, Tile-du, and Glyn Coli. The area was predominantly meadows, pastures and woodland and farmed by tenant farmers such as Walter Edwards, Llewellyn Lewis and Mary Evans. Much of the land, in common with most of the Rhondda at that time, was owned by one of the great families of Glamorgan with much of Treorchy coming under the domain of the Marquess of Bute Estate.[2] The discovery of coal in the Rhondda Valley transformed the locality and within the decades after 1851 Treorchy became a densely populated industrial town.

Treorchy was established when the Abergorki Colliery, situated in Cwm Orci to the north, was opened as a level in 1859 by a Mr Huxham, a former manager of the Bute Merthyr Colliery. This was sold to J. H. Insole of Cymmer in 1862.[3] The first deep mine in Treorchy was sunk in the 1860s by David Davies of Llandinam who would later own the Ocean Coal Company.[4] The initial development of the town was linear, based on the main road through the valley, but by 1875 a grid pattern of streets was emerging.[3]

The town grew around the coal mining industry during the late nineteenth and early twentieth century, but by the end of the twentieth century all the local pits had closed, creating an economic downturn in the community.

Treorchy was, for many years, a town that relied on the coal mines such as Abergorki, Tylecoch, Parc and Dare collieries. All of the collieries had closed by the end of the 1970s, leaving many to find new work. Treorchy became a commuter town, with the working population seeking employment in the larger towns and cities that surround it, such as Cardiff and Bridgend. The work in Treorchy now is mostly retail.

In its early days as an industrial settlement, Treorchy was considered a nonconformist stronghold, with many chapels, the largest of which was Noddfa, a Welsh Baptist chapel which could seat upwards of a thousand people and which had a proud choral tradition.

There are several roads linking Treorchy to other towns and villages. The A4061 leads over the Bwlch y Clawdd Pass, and by this road it is possible to travel to Bridgend via the Ogmore Vale and to Maesteg and Port Talbot. Within the Rhondda Fawr Valley, taking the A4061 northwards leads to the end of the valley, at Treherbert, and ultimately to Hirwaun, which is at the junction of the A465 Head of the Valleys Road, and just south of the Brecon Beacons National Park. Following the valley's course southward on the A4058, one reaches Llwynypia, Tonypandy, Porth and Pontypridd, where one can use the A470 to reach the M4 motorway and on to Cardiff.

Treorchy has a railway station on the Rhondda Line, which has regular services up the line to Treherbert and also to Cardiff Central.

Treorchy is served by buses to Blaenrhondda, Blaencwm, Treherbert, Tonypandy, Porth, Pontypridd and Caerphilly. On summer Sundays a service operates to Bridgend (via the Ogmore Valley) and Brecon. 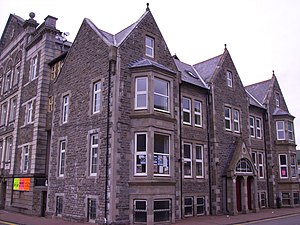 Attractions in the town include the Parc and Dare Hall, home of the Treorchy Male Choir and the Parc and Dare band.[5] The hall also provides entertainment as a venue for cinema, theatre and pantomime, and for school performances.

Treorchy hosted the National Eisteddfod in 1928, the only time the event has been held in the Rhondda.

Treorchy RFC is the rugby union club, nicknamed the Zebras.