Helston is a town in Cornwall, at the northern end of the Lizard Peninsula, twelve miles east of Penzance and nine miles southwest of Falmouth. Helston reckons itself the most southerly town in the United Kingdom, a mile and a half further south than Penzance. In 2001, the town celebrated the 800th anniversary of the granting of its Charter, making it also the oldest chartered town in Cornwall after Marazion.

Helston was once a town of tin mining and a cattle market. Today it is best known for the annual Furry Dance (known locally as the Floral Dance), said to originate from the Middle Ages.

The town is along the banks of the River Cober. Downstream is Cornwall's largest natural lake, Loe Pool, formed when a shingle bar blocked the mouth of the river by rising sea levels forming a barrier beach. To the south is the Lizard Peninsula, an area important for its complex geology and wildlife habitats[1]

There are several churches in the town. The Church of England parish church is St Michael's Church, a humble church with stained-glass windows and a tall bell tower which can be heard throughout the town.

In the surrounding graveyard there is a monument to Henry Trengrouse, the inventor of the rocket fired safety line — a device for aiding in the saving of lives in a shipwreck.

The Helston folk museum, founded in 1949, occupies the building originally designed as the town's Market House in 1837, with two separate buildings—one for butter and eggs, the other the meat market. The exhibits are mostly concerned with Helston's agricultural and market town history. The museum also hosts art exhibitions and has a shop selling all things Cornish.

The Grylls Monument, at the end of Coinagehall Street was built by public subscription in 1834 to thank Humphry Millet Grylls, a local banker, who stopped the closure of Wheal Vor, a local mine that at the time employed over a thousand people.

Helston also hosts The Flambards Experience, formerly the Helston Aero Park, which is a theme park with a selection of rides together with a few remaining aviation exhibits. Nearby Wendron is home to the Poldark Mine theme park, where visitors can go underground into the old workings.

The name "Helston" comes from the Cornish hen lis or "old court" (similar to the Welsh hen llys). The suffix 'ton' is the Old English tun; an estate or manor. The Domesday Book refers to Henliston.

Helston was granted its charter by King John in 1201. It was here that tin ingots were weighed to determine the duty due to the Duke of Cornwall when a number of stannary towns were authorised by royal decree. A document of 1396 examined by Charles Henderson shows that the old form "Hellys" was still in use [2] The manor of Helston in Kerrier was one of the 17 Antiqua maneria of the Duchy of Cornwall.[3] The seal of the borough of Helston was St Michael his wings expanded standing on a gateway the two towers domed upon the upturned dragon impaling it with his spear and bearing upon his left arm an escutcheon of the arms of England viz. Gu. three lions passant guardant in pale Or. with the legend "Sigillum comunitatis helleston burg".[4]

It is a common belief that Helston was once a port and in the 13th century Loe Bar formed a barrier across the mouth of the River Cober cutting the town off from the sea. Geomorphologists believe the bar was most likely formed by rising sea levels, after the last ice age, blocking the river and creating a barrier beach. The beach is formed mostly of flint and the nearest source is found offshore on the drowned terraces of the former river that flowed between Great Britain and France, and now under the English Channel.[5] 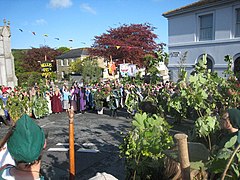 The Hal an Tow celebration

Flora Day occurs annually, on 8 May (except when the date falls on a Sunday or Monday — Monday being Market Day — when it is the preceding Saturday) Helston hosts the Furry Dance. There are four dances throughout the day, the first starting at 7 a.m. (historically for domestic servants), the ladies in summer frocks and the gentlemen in white shirts and dark grey trousers with neckties bearing the town crest, loaned for the day. The second dance at 9.50 is when children from the town's schools dance dressed all in white, the individual schools denoted by the head dresses that the girls wear. The premier dance follows at Midday when the "gentry of the County" dance, the ladies in long ball-type gowns topped off with picture hats and the gentlemen wearing full morning dress.

The final dance of the day begins at 5 p.m., a dance historically for the tradespeople of the town. Participants in this dance are the only dancers to dance around the town twice, having already danced in the 7 a.m. dance. Only Helston-born people can dance in the lead set in each dance and the first male and female will only lead that dance once in their lifetime.

Flora Day is administered by Stewards who elect stewards therefore continuing this wonderful occasion without outside interference. Helston Town Band play the famous tune and accompany all four dances on a long route around the town. The dwellings and shops of the town are festooned with bluebells, campions and whatever green foliage is available. Specific dances (not including the children's dance) go into and out of various private buildings, shops and grounds.

The origins of the dance are not known but appear to represent a pre-Christian celebration of the passing of winter.

On the same day the "Hal an Tow", another celebration of the coming of spring, is performed upon the streets of the town.[6] This is a morning ritual that is traditionally more boisterous than the dance. It is a moving street theatre that appears to have its origins in the Middle Ages, and the themes tend to be more English than uniquely Cornish. The theatre consists of the Hal-an-tow song accompanied by dancing and acting out the content of the verses. The costumes and the song itself represent many different historical and mythical themes. It has evolved over time, the most recent verse (about St Piran) only appeared within the 21st century.

Helston Town Band has a rich history, which can be traced back to the turn of the 20th century. Indeed, there are members of the current band whose family connections extend back four generations. Inevitably, during the War the band reformed with new members and in 1946 numbers were consolidated when most of its pre-war members returned from active service. The band enjoyed steady progress at this time, which culminated in 1951 when it reached the National Third Section Finals at Belle Vue, Manchester.

Bowlingclub and the Grylls Monument

The town has a King George V Playing Field, the home ground for the rugby club and finish line of An Resek Helys.

Below the town is Coronation Park which has a man made lake as its centrepiece where rowing boats can be hired in summer. A skate park is nearby in the same complex. The Penrose Amenity Area lies across the road from Coronation Park. National Trust-owned, this area, once part of the Penrose Estate, offers dog-friendly walks alongside the River Cober which leads down to Loe Pool and the sea beyond Loe Bar. Just off the main path is a bird-watching hide offering views over Loe Pool.