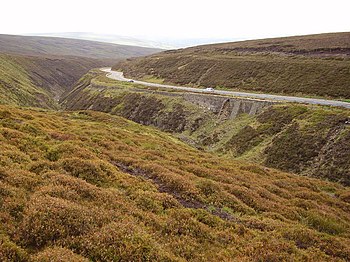 Holden Clough and the Snake Road 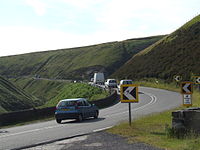 Approaching the summit from the Snake Inn

The Snake Pass in Derbyshire is the way through the hills of the Peak District which allows passage between Manchester (Lancashire) and Sheffield (Yorkshire). It is a remote place. The A57 road crosses the Peaks using the Snake Pass.

The Snake Pass runs between the town of Glossop and the Ladybower Reservoir, after which the way crosses over the Pennines watershed between the moorland plateaux of Kinder Scout and Bleaklow at a high point of 1,680 feet above sea level). To the south, The Edge, marking the end of Kinder Scout, looks down over the pass from across Black Ashop Moor and Featherbed Moss. To the north is Coldharbour Moss, rising beyond up to Shelf Moor.

The Woodhead Pass (taking the A628 along Cheshire's Longdendale to the north) is an alternative road route to the Snake Pass linking Manchester and Sheffield.

Like many other A-roads which traverse the undulating terrain of the various ranges of the Pennines, the road through the Snake Pass has a poor accident record. In winter, the road is often the first of the available routes between Sheffield and Manchester to be closed due to snow in the area. There are areas where the road surface has very poor skid resistance and a number of bends have adverse camber, and urban drivers fail to appreciate the need to drive at the speed of the road.

The trace of a Roman road can be found in the pass.

A road was first driven through the pass as a toll road in 1820 as the most direct route between the two cities. In the 20th century the more northerly route of the Woodhead Pass, which is less steep and at a lower altitude, became the primary road link between Manchester and Sheffield.

The Snake Pass passes through the National Trust's High Peak Estate. Much of it falls within the Hope Woodlands parish.

Snake Pass was listed as one of best driving roads in the UK by Auto Trader magazine in 2009.[1]

The name of the road is not from its winding route, but from the emblem of the Snake Inn, one of the few buildings on the high stretch of road. The name of the inn was derived from the serpent on the Cavendish arms of the Duke of Devonshire.

In recent times, the Snake Inn was renamed the "Snake Pass Inn", as the road became more famous than the inn which had given it the name.

Closures due to inclement weather 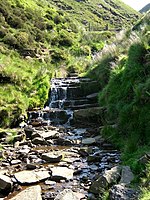 Upper North Grain drops down to the pass

Snake Pass is often closed in the winter months as the bending roads become icy and little grit is placed down to combat the problem. The British winter of 2010–11 was one the coldest for decades and the road was closed on numerous occasions.[2][3]

Snake Pass is one of only a few road climbs in the United Kingdom that are comparable in length and average gradient (approximately 7% for around 3.2 miles when starting in Glossop) to those used in continental cycle racing. For this reason it has frequently featured in the Tour of Britain along with another nearby favourite, Holme Moss.