From Wikishire
(Redirected from Woodhead Tunnel)
Jump to: navigation, search 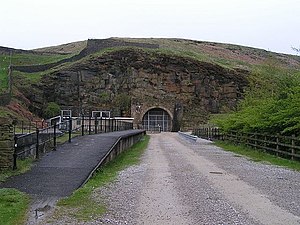 The Woodhead Tunnels are three parallel railway tunnels three miles long in beneath the Pennines, built to carry the railway across the barrier of the Pennine Hills on what became known as the Woodhead Line, once a major rail link from Manchester in Lancashire to Sheffield in Yorkshire. The western portals of the tunnels are at Woodhead in Cheshire and the eastern portals are at Dunford Bridge, near Penistone in the West Riding of Yorkshire.

Woodhead 1 was one of the world's longest railway tunnels when it opened in 1845. Woodhead 2 was completed in 1853 and Woodhead 3 opened almost exactly 100 years later in 1953. Passenger services ended in 1970 and the last train passed through in 1981.

The tunnels are currently owned by National Grid plc who initially used Woodhead 1 and 2 to carry power cables and in 2008 started to install new cables in Woodhead 3. The use of Woodhead 3 for power cables was controversial as it would make it very much more difficult to restart rail services on the line, and it was resisted by a sizeable campaign. 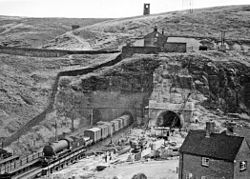 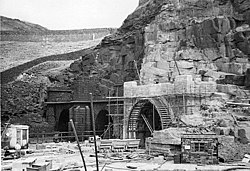 Western portals of Woddhead 1 & 2 in 1953, with Woodhead 3 under construction

The first of the earlier twin tunnels (Woodhead 1 and 2) was completed by the Sheffield, Ashton-Under-Lyne and Manchester Railway in 1845, engineered by Charles Vignoles and Joseph Locke. At the time of its completion in 1845, Woodhead 1 was one of the world's longest railway tunnels at a length of 3 miles 13 yards; it was the first of several trans-Pennine tunnels including the Standedge and Totley tunnels, which are only slightly longer.

Vignoles began work as soon as the line obtained its Act of Incorporation in Parliament in 1837. First the line was marked over the ridge and a series of vertical shafts were bored. From the bases of these, a horizontal driftway was driven along the line of the first bore. Although sufficient land had been purchased for two tunnels, only one would be built initially.

It was driven through mostly Millstone Grit, interspersed in places by patches of argillaceous shale and softer sandstone on a gradient of 1 in 201, rising toward the east. Wires were suspended down each shaft from which the centre line was determined by means of a theodolite. The accuracy was such that the driftways met with less than three inches of error.

When Vignoles resigned because of differences with the directors, Locke took over as a consultant and reported that the amount of water being encountered required the purchase of more powerful pumps. Although the number of people employed reached 1,500 at one time, generally there were around 400 since there was limited space to work. Some 157 tons of gunpowder were used and over 8 million tons of water were pumped out. Once completed the tunnel had cost £200,000 and 26 lives had been lost.

The second bore was completed by the later Manchester, Sheffield and Lincolnshire Railway in 1852. Although more care was taken over the safety of the workers, an outbreak of cholera in 1849 resulted in 28 deaths.

The twin tunnels saw heavy use by steam trains (250 trains a day each way), and this traffic had a huge effect on the economy of the route well into the 1950s.[1] They had a reputation for having a very poor operating environment with high maintenance needs, since such heavy usage had never been envisaged by their original constructors.

The tunnels were known to train crews as the "hell holes" as they were a very narrow bore and became claustrophobic and sooty as trains passed through. They were too narrow and very unsuitable for electrification and were closed in 1953 when Woodhead 3 was completed.[1]

Since 1963, the north tunnel has been used by National Grid plc to carry the trans-Pennine 400 kV electricity link below ground under the Peak District National Park.[2] A 2-foot narrow gauge railway runs into the tunnel to service this link.[3]

The south tunnel, in a worse condition, has suffered from collapses and is not currently suitable for cabling or transport.[2]

In January 2008, work started to move the electric cable from the north tunnel to Woodhead 3.[4] 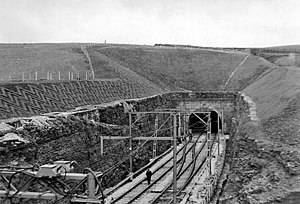 The eastern portal of Woodhead 3 shortly before opening in 1954 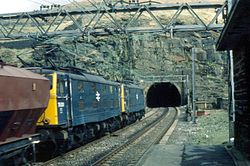 A train about to enter the western portal of Woodhead 3, shortly before closure in 1981

The first two tunnels were replaced by Woodhead 3, which was longer than the other two at 3 miles 66 yards. It was bored purposely for the overhead electrification of the route and completed in 1953. The tunnel was opened by the then transport minister Alan Lennox-Boyd on 3 June 1954.[1] It was designed by Sir William Halcrow & Partners. The line was electrified at 1,500V DC in a project known as the Manchester–Sheffield–Wath electrification.

In the 1960s, it was proposed that this tunnel should be used as part of a Manchester to Sheffield motorway but, in the end, only a short section of the M67 motorway was built.[5]

In 2007, National Grid plc, the present owners of the tunnels, proposed to relocate electricity cables from the Victorian to Woodhead 3, the 1953 tunnel in 2008. This sparked controversy as it would mean that it would not be possible to use Woodhead 3, the newer tunnel for railway traffic in future. There are now various groups advocating keeping it open.[2]

Proposals to re-open the tunnel for rail traffic

In 1999 Central Railway proposed using the Woodhead tunnel as part of an ambitious scheme to connect Liverpool to London.[6]

In 2003 the Greater Manchester Branch of the Institute of Logistics and Transport presented evidence to a Parliamentary Select Committee mentioning Arriva's interest in opening the Woodhead Line and Tunnel as part of their bid for the Trans-Pennine rail franchise.[10]

The Victorian tunnels, rebored to a Channel-tunnel diameter, are the main east–west route of the 'High Speed UK' alternative proposals to HS2/3.[13] 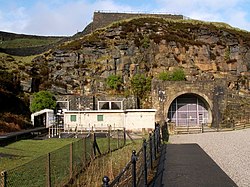 The western portals of the Woodhead Tunnels in 2008

One of the Victorian tunnels, the south tunnel, is in a poor condition and is unused. The north tunnel carries electrical cables for the National Grid that are coming to the end of their operational life and National Grid plc is preparing to install electricity cables in Woodhead 3, which would make it unavailable for rail traffic. The other two older tunnels are not suitable for rail traffic due to their poor state of repair.[2]

In July 2007 the Peak District National Park formally expressed concern at the plans to place cables in Woodhead 3, observing that it could not then be used for rail traffic.[2] In September 2007 the Government Office for the East Midlands replied indicating that in their view it was unlikely that the route would be used for rail traffic and declined to intervene.[14] On 18 December a written answer in the Commons stated that laying cables in the tunnel would not preclude opening the route to rail traffic. On 23 January the Department for Transport 'clarified' this, saying that that only the older Victorian tunnels, which were in poor condition, would be available.[15] In December 2007 the Campaign for Better Transport (UK) began campaigning to keep the Woodhead Tunnel available for rail traffic and encouraging people to write to their MP.[16] On 8 January the Northern Way, a collaboration between the three Northern Regional Development Agencies: Yorkshire Forward, Northwest Regional Development Agency and One NorthEast, called for the government to ensure the potential reuse of Woodhead Tunnels for rail use in the future. The Northern Way had previously published that economic benefit could be as much as £10 billion nationally with £3.5 billion of this in the North.[17]

Balfour Beatty, the civil contractors fitting the new electricity cables through the tunnel, were engaged in phase 2 of the project. The cables exiting the tunnel were being laid individually in concrete and sand insulated ducts at the tunnel exit, leading up to, and ready to be connected to, the first pylon. The old galvanised steelwork hanging over the River Etherow was dismantled and removed. The inside of the tunnel has a flat concrete floor and concrete-finished walls and ceiling. The cables run down both sides of the tunnel attached to metal framework from one end to the other. There are six cables running along each wall, each about 12 inches in diameter with thick insulation. Other ducting and cables run along the floor. There is no evidence inside the tunnel that trains operated inside, other than the shape of the tunnel. At the western end of the tunnel the old concrete and tarmac platforms still stand.

It was reported on 5 November 2013 that the two Victorian tunnels would be sealed following a decision made by Government not to purchase the two tunnels from National Grid: the Transport Minister said that building a new tunnel would be a better option should the route ever be used again for trains.[19][20]