Wythenshawe is a town in Cheshire developed from scratch from the 1920s for cheap housing for the poor of Manchester and which has now become a contiguous suburb in the south of that city.

After the First World War, in the 1920s, the Manchester Corporation began to build a massive housing estate in Wythenshaw to resolve the problem of its inner city slums (and in 1931, Parliament placed Wythenshawe within the administrative area of Manchester). With an area of approximately 11 square miles, Wythenshawe has often been referred to as one of the largest council housing estates in Europe,[1] although a significant proportion of the estate is now privately owned housing.

The district of the town comprises nine areas: Baguley, Benchill, Peel Hall], Newall Green, Woodhouse Park, Moss Nook, Sharston, Northenden and Northern Moor. The boundaries of these areas have changed throughout the town's history, and previously known areas such as Brownley Green and Crossacres have since been assimilated into one of the areas listed above, though many residents still refer to them by name.

The name of Wythenshawe is from Old English and appears to be from the words wiðign sceaga, menaing "willow / withy tree wood; "shaw" remains a dialect word for "wood". Until the creation of the housing estates, the name of Wythenshaw had referred only to Wythenshawe Hall and its grounds,[2] and in place of today's town were three ancient townships; Northenden, Baguley, and Northen Etchells. These became the present-day Wythenshawe when they were merged into the Manchester Corporation's area in 1931. 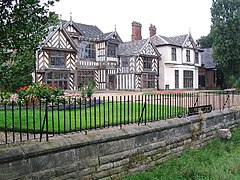 For many centuries the Tatton family owned Wythenshawe Hall and much land in what is now Wythenshawe. Manchester Corporation, which was in desperate need of land to house the city's rapidly increasing population, pressured Mr Tatton to part with the land in 1926. What was once farmland was transformed into one of the largest housing estates in Europe.

Before Manchester's Barton and Ringway airports were laid out, three farm fields between Rackhouse Road and Wythenshawe Road in what is now the north edge of Wythenshawe were used as Manchester (Wythenshawe) Aerodrome. This was the UK's first municipal airfield, and operated between April 1929 and early 1930. A barn was converted to act as the hangar and a farmhouse as the administration building. Temporary fuel pumps were installed.[3] 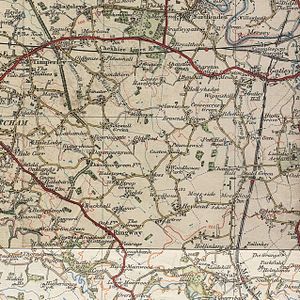 Where Manchester Airport and Wythenshawe now stand, as in 1925

Wythenshawe is Manchester's largest district, a massive housing estate that was created in the 1920s intended as a "garden city" where an overspill population could be rehoused away from the slums and squalor of industrial Manchester.

The estate was built initially without shops, amenities or services, and there was very little employment directly to hand: people wanting to buy household supplies had to "wait until the mobile shop came round, or go to Northenden". Various residents' associations were set up to address these problems, but progress was very slow. Wythenshawe eventually expanded, and businesses were attracted to the area with the creation of the Sharston Industrial Estate and, later, the Moss Nook and Roundthorn industrial complexes. Wythenshawe gradually acquired all the amenities and facilities that the original planners had neglected to include, such as schools, shops, pubs and churches. The area also got its own hospital, and Wythenshawe Hospital grew out of the earlier Baguley Hospital after the Second First World Warn 1948. The largest shopping area was constructed in the 1960s in the town centre (known locally as the Wythenshawe Civic Centre), which has been expanded further since its initial construction. In 1971, the Wythenshawe Forum was opened, which included a library, a swimming pool and a theatre.

Many houses previously owned by the council are now under the control of local housing associations, such as Willow Park in Benchill and Parkway Green in Baguley. Parkway Green Housing Trust is based around the west Wythenshawe Region. Some of the areas where they provide houseing are; Northern Moor, Baguley, Royal Oak, Northenden and some more smaller areas.

Wythenshawe has 12 parks and 18 woodland areas including Wythenshawe Park which covers over 270 acres of green space and is home to Manchester's only community farm. At the centre of the park is the historic Wythenshawe Hall with its Civil War and Tatton heritage. The park also has riding stables, a horticulture centre, tea rooms, children's play area, athletics track, football pitches, tennis courts, bowls and golfing facilities. Other parks include Hollyhedge Park, Peel Hall Park, Painswick Park and Baguley Park. Northenden's Riverside Park is the first new park to be established in the city this century.

The housing projects in Wythenshawe have been described as representing an "extreme pocket of social deprivation and alienation."[4]

Shadow Moss is an area south of Ringway Road in the southeast corner of Wythenshawe. It is roughly the rectangular area between three country lanes with Heyhead at its northwest corner.[5] On modern maps its north edge is (the south branch of) Ringway Road. It was partly in Northen Etchells township and partly in Styal parish. For many centuries it was a peat bog which was dug for peat fuel (which in the area was called "turf"); local law said that after digging peat the top living plant layer had to be lodged back to let more peat form afterwards. Each man's allocated part of the Moss was called his "moss room".

As at about 1970, Heyhead was a small settlement at the south end of Woodhouse Lane and the near part of Ringway Road: it was made of some terrace houses, a small shop, two or more old cottages, and a chapel, and the Ringway Haulage Company.

In the 19th century, manorial control was lost over what people used their moss rooms for, and an 1839 tithe map of Northen Etchells shows Northen Etchells's part of Shadow Moss as about ⅔ arable land|arable, about ⅓ meadow, one field as pasture, and one field as "uncultivated moors".[6]

Later, the fertile lowland peat soil led to the area being much used for market gardening, with large areas under greenhouses. Of the people who worked there, many lived in Heyhead.

In the 1990s Manchester Airport's on-the-level car parking expanded across much of the area, and by 2011 all Heyhead's buildings had vanished. At the far east of the Shadow Moss area (as at June 2012) some greenhouses remain, but are used for car parking and not for growing any crop; the last market gardener there (he grew tomatoes) closed down in 2011 due to competition from highly mechanized enormous greenhouse establishments elsewhere.

About 43,000 people work in Wythenshawe. There are four areas of industrial activity (estates) - Moss Nook, Ringway (Airport Cargo Centre), Roundthorn and Sharston. Manchester Airport and UHSM Wythenshawe Hospital are two of the largest employers in the area, and various national companies also have premises in Wythenshawe.

Several greenfield and greyfield sites have been opened up to developers and there are several new housing developments within the area.

The town centre, originally built in the 1960s, was renovated between 1999 and 2002, to include new stores and other new features. The main shopping area now features gates that are locked at night to prevent the vandalism that was seen in previous years. The Forum centre, which houses a library, leisure centre, cafe and other amenities, has also been renovated in a more modern style. In 2007, Asda opened a new superstore with multi-storey car parking on the site of the old Co-operative store that was originally built in the 1970s. A walkway going between the multi-storey car park and the large supermarket building now features a wall mosaic depicting various aspects of the town. After the demolition of two 1960s blocks of multi-storey flats in 2007, a new local authority services hub is currently being constructed by Manchester City Council that will provide a new frontage for the town centre from its north-facing aspect.