Blackley is a Lancashire village which has become swallowed up in the suburbs of Manchester in the south of that county. It is three miles north of Manchester city centre, by a meander of the River Irk. Further north is Middleton.

Blackley is crossed by a main arterial road from the city centre, Rochdale Road (the A664), to Middleton.

The hamlet of Blackley was mentioned in the Domesday Book. The name derives from the Old English Blæcleah, meaning 'dark meadow / clearing'. In the 13th and 14th centuries Blackley was referred to as Blakeley or Blakelegh, a spelling that is consistent with the local pronunciation.[1]

By the Middle Ages, Blackley had become a park belonging to the lords of Manchester. Its value in 1282 was recorded as £6 13s 4d.

The lords of Manchester leased the land from time to time. In 1473 John Byron held the leases on Blackley village, Blackley field and Pillingworth fields at an annual rent of £33 6s 8d. The Byron family continued to hold the land until the beginning of the 17th century when Blackley was sold in parcels to a number of landowners.[1]

By the middle of the 17th century Blackley was a village of just 107 inhabitants. Blackley today is hardly recognisable as the same rural area that it had been at the start of the 19th century. Now only local place names like Meadows School, Plant Hill or French Barn Lane hint at its rural past.[2]

The first industrial enterprise in the area was the Borelle Dyeworks, established in 1785, by an emigrant French industrialist Louis Borelle, who gave his name in corrupted form to Barrel Brow.[3] A contemporary and compatriot of his was Angel Raphael Louis Delaunay, whose Delaunay Dyeworks, famous for their 'Turkey Red' dye, has given its name to Delauney's Road.[3]

After Delaunay's death in 1865, the noted chemist Ivan Levinstein bought the dyeworks.[3] The facility expanded, under Imperial Chemical Industries (ICI) ownership, to employ a large number, many in chemical research.[4][5] It was in the ICI laboratories that not only dyestuffs but also medical breakthroughs such as the anti-malarial drug Paludrine,[6][7] and Antrycide to combat African sleeping sickness were discovered. In recent years the facility has contracted, and the staff level is now less than 100 in a descendant company, Avecia, and the land at one point was scheduled for housing developments.

Adjacent to this facility, and formerly an early 19th-century logwood mill, there was another plant, Connolly's (Blackley) Ltd., later BICC, makers of telecommunication cabling.

This is an area with a mixture of housing which is mainly privately owned homes: owner-occupied, private renting and A small number of social housing units. 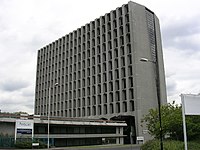 Blackley is well served in terms of green space and parks, with significant open spaces at Tweedale Common, Irk Valley and Nutbank Common.

Boggart Hole Clough is a country park where many walks can be undertaken, guided or otherwise. Thanks to recent funding the park now has many leisure facilities; a bowling green, tennis and basketball courts, a boating lake and a children's play area. It has its own permanent orienteering course and an athletics track. Visitors can enjoy family fun days in the summer and an annual firework display. There is a considerably old stone bridge across the brook running through the clough.

Blackley Forest is a Site of Biological Importance and an example of one of the country's first Community Woodlands. Planted to commemorate the Queen’s coronation and also the local people who gave their lives in the Second World War. The area has had woodland on it since the Norman Conquest in 1066, when wild boar and deer roamed and eagles flew above.[8]

The forest is a diverse mix of woodland, grassland and wetlands, dissected by a well established network of paths and steps. The River Irk can be seen in its most natural state, fringed by birch trees with some colonies of autumn crocus.

Heaton Park, at around 650 acres, is the biggest park in Salfordshire, and one of the largest municipal parks in Western Europe, providing some 25% of Manchester's total green space. It is the grounds of Heaton Hall, a Grade I listed, neoclassical 18th-century country mansion. The hall was remodelled to a design by James Wyatt in 1772,[9] and is now open to the public as a museum and events venue.