Knutsford is a prosperous town in Cheshire. It is found about 12 miles south-west of Manchester and 11 miles northwest of Macclesfield.

In 2005 Knutsford was named as the most expensive town to buy a house in northern England, followed by nearby town Altrincham. There is a broad range of house prices in Knutsford, currently varying from approximately £85,000 to £2,000,000.[1] The big difference in house prices creates social divide in the town, a problem shared with nearby places such as Altrincham, Wilmslow and Alderley Edge.

The town lies on the Cheshire Plain, which spreads out between the Peak District in the South Pennines to the east and the Clwydian Range in the Welsh mountains to the west. Knutsford's proximity to Manchester has both now and historically helped it become a commuter town for those employed in Manchester. Today the town's location gives it easy access to Liverpool and all the other busy towns of southern Lancashire.

Knutsford's main town centre streets, Princess Street (also known locally as Top Street) and King Street lower down (also known as Bottom Street), form the "hub" of the town. At one end of the narrow King Street is an entrance to Tatton Park. The Tatton estate was home to the Egerton family, and has given its name to the Tatton parliamentary constituency, within which Knutsford falls. 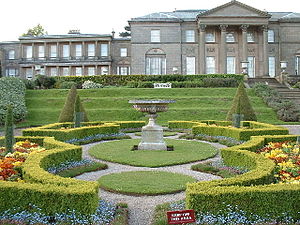 The Mansion in Tatton Park

Knutsford is recorded in the Domesday Book of 1086 as Cunetesford ("Canute's ford"). One explanation for the names is that it is from King Canute (Cnut in Old English), the Dane who ruled as King of the English 1016–1035, and as King of the Danes and Norwegians. A later local tradition says that King Canute forded the River Lily, which was said to be dangerous then, though other reports say it was the Birkin Brook at or near Booth Mill.[2] The English Place-Name Society proposeds that the name is derived either from "Cnut's ford" or from "hillock ford".[3]

Others have suggested that the town's name means 'neat's ford' (Cu neates ford), a crossing place for cattle.

Growth after the war

After the Second World War, overspill housing estates were created in the town to accommodate families from Manchester. Later overspill estates were built in Over ward, which was named 'Longridge'. At the end of the 20th century, all of the homes on the estate that had not previously been sold to the occupants were transferred to Manchester Methodist Housing. 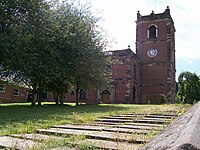 Churches in Knutsford include: 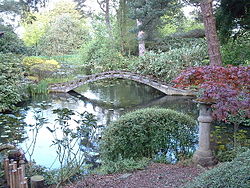 The Japanese Garden in Tatton Park

There are many events in and around the town each year including the May Day festivities, The RHS Flower show at Tatton Park and the Cheshire County Show in the parish of Tabley, near Knutsford.

The annual Knutsford Royal May Day festival is where hundreds of people parade through the streets, and the May Queen is crowned. During the May Day weekend there is also a funfair run on 'The Heath' (where the crowning of the May Queen also takes place) This is said to be one of the largest funfairs in Britain.

A peculiar May Day custom still observed today in Knutsford is that of "sanding the streets". The streets are decorated with coloured sands in patterns and pictures.

Tradition has it that King Canute, while fording the River Lily, threw sand from his shoes into the path of a wedding party, wishing the newly-wed as many children as the grains of sand at their feet.[4] The custom can be traced to the late 1600s. Queen Victoria, in her journal of 1832 recorded: "we arrived at Knutsford, where we were most civilly received, the streets being sanded in shapes which is peculiar to this town".

Knutsford was the model for Elizabeth Gaskell's novel Cranford. She lived in the town for some time, on what is now known as Gaskell Avenue, and she is buried in the Unitarian Chapel graveyard. Many of the places and people described in her books can be identified as being based on places and people in the town. In 2007 the BBC adapted the novel and produced a popular television series of the same name, which was actually filmed in Lacock in Wiltshire. The BBC said that did not consider filming the series in Knutsford due to its high density of restaurants.

Knutsford Amateur Drama Society was established in 1925 and moved to their premises in Queen Street, Knutsford shortly after the end of the Second World War. Now known by the name of the building they occupy, Knutsford Little Theatre continues to produce a selection of plays each year including a very popular annual pantomime.