Wrotham is a village on the Pilgrims' Way in Kent, at the foot of the North Downs. It is one mile north of Borough Green and approximately five miles east of Sevenoaks. It is between the M20 and M26 motorways.

The name first occurs as Uurotaham in the year 788, meaning 'homestead of a man called Wrōta.'[1] 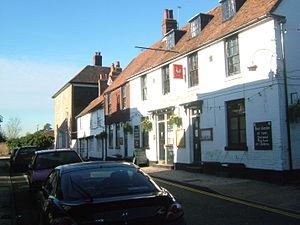 The George and Dragon pub, on the High Street

The village has a central concentration of pubs, three within a hundred yards of each other: the Rose and Crown, the George and Dragon and the Bull Hotel. A fourth, the Three Postboys, ceased trading in 2009.

The offshoot village on Wrotham Heath of the same name as the heath, once an area of wholly common land, is a mile and a half south-east.

Wrotham Hill to the north was a main measuring point for the eighteenth-century trigonometric survey linking the Greenwich Royal Observatory with the Paris Observatory. This Anglo-French Survey (1784–1790) was led by General William Roy.

Close by is the Wrotham transmitting station which was the first transmitter in the UK to broadcast on FM in 1955 and now carries the main national FM radio frequencies for most of London.

Wrotham shows extensive signs of occupation by the Romans and it is posited that the Wrotham Pinot, a disease-resistant variety of the Pinot noir grape found in Wrotham churchyard, is descended from vines brought by the Romans.