Reigate is a historic market town in Surrey at the foot of the North Downs, and in the London commuter belt. It forms a continuous urban area with the adjacent town of Redhill. It is within the Reigate Hundred, to which it has lent its name.

Some of the hills in the Downs hereabouts are amongst the highest in the county, though dwarfed by far-off Leith Hill, there are impressive hills at Colley Hill a mile north of the town (756 feet) and Reigate Hill 2½ miles east of that Colley Hill (723 feet). 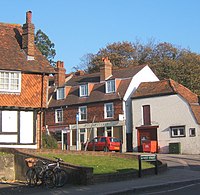 Reigate town centre has a good range of shops, bars, and restaurants. Most of the shops are smaller independently owned boutiques. Due to the wealth of the area many designer labels can be picked out from the charity shops. Although there are two supermarkets in Reigate, the town still manages to keep hold of a village feel.

The most popular park in Reigate is the Priory Park, which is located behind the High Street, adjacent to Bell Street. It has a massive enclosed area for smaller children as well as football fields, tennis courts, a skatepark, a huge wooded area and a serene lake with an abundance of wildlife.

Reigate appears in Domesday Book in 1086 as Cherchefelle.

The origin of the name "Reigate" is uncertain, but appears to derive from he Old English Ra geat: Roe-deer Gate, perhaps because the town stood near to the entrance to the de Warenne's deer park[1]

There are neolithic flint mines on the ridge of the North Downs above Reigate. The Bronze Age barrows on Reigate Heath indicate there was ancient settlement in the area. A Bronze Age spearhead was recovered on Park Hill in Reigate Priory Park. A Roman tile kiln dated to around 92 AD was recovered from the grounds of Rosehill in Doods Way in 2004. Tiles on the Rosehill site were first discovered in the 1880s which would have been used for buildings of high status in the area. The Rosehill find is also the oldest recorded use of Reigate Stone (Upper Greensand) for "ashlar masonry work".

Reigate appears in Domesday Book in 1086 as Cherchefelle. It was held by William the Conqueror as successor to King Edward's widow, Queen Edith. Its Domesday assets were: 34 hides. It had 2 mills worth 11s 10s, 29 ploughs, 12 acres of meadow, pannage and herbage worth 183 hogs. It rendered £40.[2] 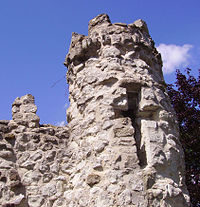 The early town stood at least in part in what is now the Church Street area of Reigate, close to the church. Part of the site was excavated in the 1990s. It was shown that the settlement moved during the earlier part of the 12th century when the present new town was formed. King William I granted the land around Reigate to one of his supporters, William de Warenne, who was created Earl of Surrey in 1088. It is believed that his son, William de Warenne, 2nd Earl of Surrey, ordered that Reigate Castle be built. The de Warennes had become wealthy through grants from the Conqueror: their southern base was in Lewes, Sussex and they had castles in Yorkshire and in Normandy. Around 1150 the Earl de Warenne set out a new town below the castle. This town forms the basis of modern-day Reigate.

Little is known of the Castle which has never been excavated on any great scale. Local legend says[1] before the signing of the Magna Carta, the rebellious barons met to hammer out the details of the document in the extensive[3] caves beneath the castle. The story however has no truth to it. The castle later fell into decay and the remains demolished at the end of the 17th century, though the grounds remain as a public garden, and the caves are occasionally opened for tours.

The mediæval town is centred on a north-south road of some antiquity as it incorporates the pre-Conquest road pattern. Parts of the town have been the subject of extensive archaeological investigation. Bell Street was certainly in existence by the middle of the 12th century and Mesolithic implements have been found here.[4] Much of the High Street appears to be slightly later although there appear to have been buildings along the south side of the Street near to the junction with Bell Street by the 13th century at the latest.[4] The market place was originally around Slipshoe Street, at the junction of West Street, but became encroached upon by infilled houses and it was moved to the east end of the High Street by the end of the 16th century.[5] The results of much of this work has been published; many of the finds are held in the museum of the Holmesdale Natural History Club in Croydon Road.

Probably early in the 13th century, Reigate Priory was founded for regular Canons of the Order of St Augustine although it was strictly speaking the Hospital of the Crutched Friars - a suborder. After the dissolution of the monasteries in 1535 the estate was granted by Henry VIII to William Howard, 1st Baron Howard of Effingham, who soon converted the Priory buildings into a residence. The Effingham branch of the Howard family, including the Earl of Nottingham who as Lord High Admiral commanded the force which defeated the Spanish Armada, lived there until their heirs sold it to the wealthy London brewer, John Parsons in 1681. Remains of the former monastery buildings are known to lie beneath the lawns to the south of the present mainly 18th century house, which is now used as a school. 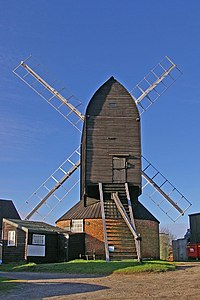 The town developed a large trade in oatmeal during the 16th century[6] but this had ceased by about 1720. There was a noted tannery at Linkfield Street which was expanded in the 19th century. It burnt down about 1930.

The coming of the Brighton railway in 1841 led to a rapid expansion of the parish, concentrated around the railway station in an area that was previously uninhabited.

The old unincorporated Borough of Reigate elected two MPs until the Reform Act of 1832.

Reigate has two windmills: the Post mill at Reigate Heath and the tower mill at Wray Common. Previously there had been about a dozen animal powered mills for making oatmeal as well as several water and windmills.[7]