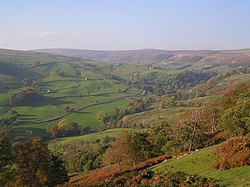 Nidderdale is one of the famous Yorkshire Dales. It carves its way through the West Riding of Yorkshire bearing the River Nidd. The dale carries the upper reaches of the Nidd, which river rises on the slopes of Great Whernside flows south through the dale and then eastward, a general course it retains even out of the dale and into the Vale of York.

In the higher parts of the dale the Nidd has been dammed to create several reservoirs including its greatest, the Gouthwaite Reservoir.

The Nidd eventually joins the River Ouse at Nun Monkton a little north of York. 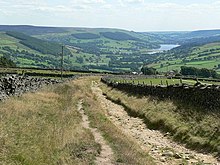 In Moor Lane looking down Nidderdale

Nidderdale was designated an "Area of Outstanding Natural Beauty" in 1994.[1] The Nidderdale AONB is not faithful to the dale though, its bounds drawn to hop over the hills and encompass also part of lower Wharfedale, the Washburn valley and part of lower Wensleydale, including Jervaulx Abbey and the side valleys west of the River Ure.