Barwick-in-Elmet is a village in the West Riding of Yorkshire, seven miles from the centre of Leeds. It is one of three villages, all in the West Riding, with a name incorporating that of the ancient Welsh kingdom of Elmet, which survived in this part of the Pennines until the 7th century. The others are Scholes-in-Elmet and Sherburn-in-Elmet. Barwick and Scholes share a civil parish ('Barwick in Elmet and Scholes').

Barwick-in-Elmet is referred to locally as simply Barwick, with a silent 'w' pronounced "Bar-rick". In the Domesday Book of 1086 the area was known as Berewit and Berewith.

There are major Iron Age and Norman earthworks in the centre of the village called Wendel Hill and Hall Tower Hill. The Domesday Book of 1086 refers to the manor as Berewit. In 1379 it was recorded that there were 197 adults living in about 100 households. 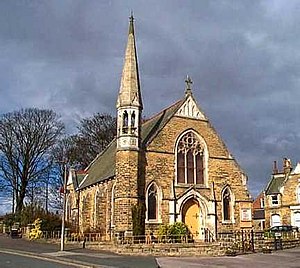 For some time the Manor of Barwick and Scholes was in the ownership of the Gascoigne family of Parlington and Lotherton.

The Cross Gates to Wetherby railway line opened in 1874, with a station in nearby Scholes, enabling residents to commute to Leeds. This service remained running until 1965, when the line closed under the Beeching Axe.

Throughout the 20th century the village grew with many modern houses being built in and around the village by both private developers and the local corporations. During this period many of the older cottages in the village centre were converted into shops and other small business premises.

For much of its history the village supported a mainly agricultural community. From the late seventeenth century until the early twentieth many residents were employed in the local mining industry in Garforth, Cross Gates and Whitkirk. Today, whilst still having a rural agricultural feel, the village supports many trades as well as housing for people who work in Leeds and York.

The village includes earthworks created as an Iron Age fort, and used later as the site of a Norman Motte and Bailey castle and later as a Second World War observation post. The land is currently under multiple ownership (which causes problems for those earnest for its conservation).

One of the most notable village landmarks is the wooden maypole, 86 feet high that stands at the junction of Main Street and The Cross. The triennial maypole festival (held on Spring Bank Holiday) typically brings large crowds to the area. Every three years, the maypole is lowered, inspected, maintained and re-erected. The festival celebrations include a procession (involving floats decorated by local organisations), children's maypole dancing, morris dancing, a street craft market, and the raising of the maypole ceremony. Traditionally the maypole was lowered and raised manually using an intricate system of ropes and ladders.[1][2] Although methods have changed in recent years, the maypole is still carried by hand from Hall Tower Hill to the heart of the village. During the raising ceremony, it is tradition for a local villager to climb halfway up the pole to disconnect the guide ropes. The climber is then spurred on by a large crowd to climb all the way to the top of the pole, to spin 'the fox' weather vane (a custom thought to bring good luck to the village). The last maypole festival took place on 26 May 2014, and the next festival is scheduled to take place in May 2017.[3][4][5] 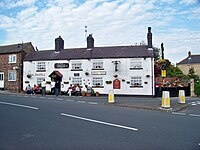 Barwick has three public houses, The New Inn, The Black Swan and The Gascoigne Arms. There are two general stores (the larger one with a post office); a fish and chip shop; an Italian takeaway; a bicycle store; a florists, bakers, hair & beauty salon and a car mechanics. There are two small churches, one Church of England and one Methodist.

There are further amenities in nearby Garforth, Cross Gates, Seacroft and Wetherby, all of which have supermarkets. There are nearby secondary schools in Pendas Fields, Garforth, Seacroft, Boston Spa and Wetherby. 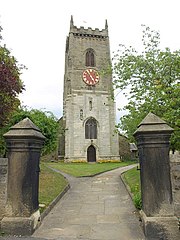 Barwick parish church is a grade II* listed building. It includes Anglo-Saxon and Norman stonework, with a 14th-century chancel and various later additions and alterations.[6][7]

The Unitarian minister Newcome Cappe was married here on 19 February 1788 on his second marriage to Catherine Cappe.([1], p.,246)

There is also a Methodist church in the village.

The local BBC radio station is BBC Radio Leeds, whilst there are many other independent local radio stations in the area.

The theme tune to The Archers is called "Barwick Green". It was written by Yorkshire composer Arthur Wood in 1924, as a "maypole dance" in his suite My native heath. The other items in this suite are "Ilkley Tarn", "Bolton Abbey" and "Knaresborough Status".[8]

Widge, the protagonist in The Shakespeare Stealer, a 1998 young adult novel by Gary Gary Blackwood, is from Barwick-in-Elmet.